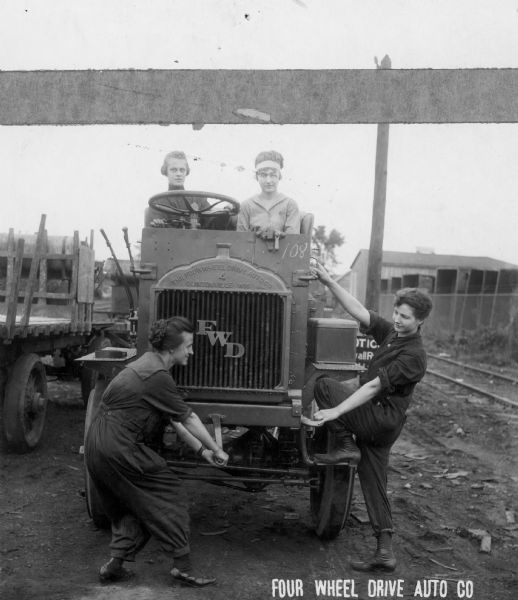 Looking At Women In Workforce During World War I
By Erika Janik
Share:

Pictured here are four of the women who joined the workforce at the Four Wheel Drive Co., in Clintonville. They built trucks for the U.S. and British armies during World War I, manufacturing more than 20,000 of them during the war years.

Four-wheel drive had been invented in Clintonville around 1908 when Otto Zachow and William Besserdich developed a simple and effective way of transferring power to all four wheels of an automobile. They started the Four Wheel Drive Auto Co/. in 1909. The company soon switched from automobiles to trucks, and participated in a 1912 U.S. Army test of the trucks as a replacement for mules and wagons.

At first, things didn’t go so great for the trucks. The Army mules performed at hauling goods. But, the trucks got better and Clintonville became a center of heavy truck production, reaching an international market during World War I.

Women were involved with trucks even before the war. In 1913, the Four Wheel Drive Co., selected six women to demonstrate the ease of steering big trucks. One of these women, Luella Bates, became the face of the company, spending months on the road demonstrating the trucks and their capabilities.

When the war began, women filled positions left empty by local men serving in the war.