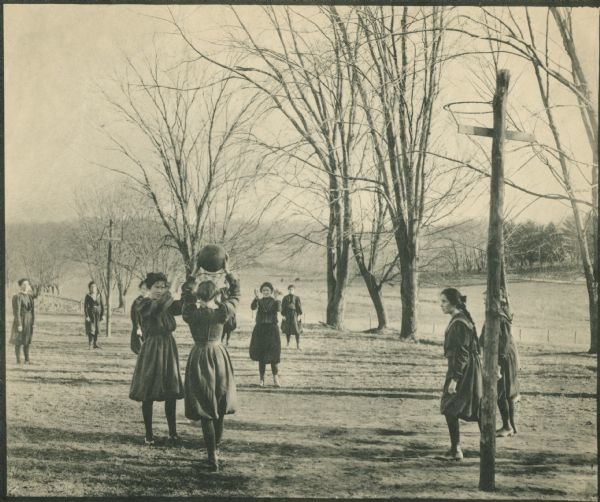 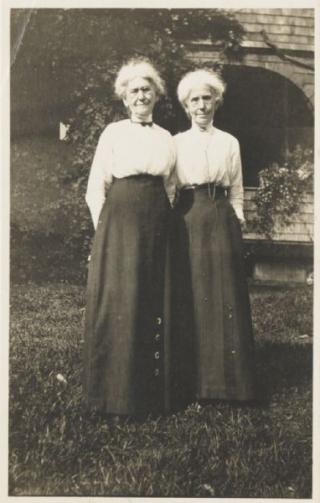 In this image, girls at the Hillside Home School in Spring Green play basketball outdoors around 1900. The school was the work of Ellen "Nell" Lloyd Jones and Jane "Jenny" Lloyd Jones, the remarkable aunts of famed architect Frank Lloyd Wright.

While Frank Lloyd Wright — his innovative buildings and his tumultuous love life — tend to get most of the attention, his mother’s sisters, "the Aunts" as Frank called them, had a lasting influence on him and the students that they taught. In 1887, Nell and Jenny founded Hillside Home School on their family farm in Spring Green. They commissioned their young nephew (Frank was 19) to design the building.

Jenny and Nell came to their educational enterprise with a wealth of experience. Nell had been the head of the history department at River Falls State Normal School, while Jenny had directed a kindergarten-training school in Minnesota. Uniting farm, home and school, the Hillside Home School was a progressive "learn-by-doing" school that educated students — girls and boys — from elementary through high school. It was perhaps the first coeducational home schools in the country.

The school’s location on a 100-acre farm was touted as an asset to education.

"The location of the school removes them from the distraction of the city and surrounds them with the ennobling influences of nature," proclaimed an 1893 Hillside Home School booklet. The sisters believed that education should teach the basics like math and reading while also attending to the development of empathetic and engaged human beings. Many classes were held outdoors. Older students taught younger ones about responsibility and good manners.

Jenny and Nell also believed that women should exercise and play sports, a view that was not yet common. Femininity throughout much of the 19th century was delicate and passive, not healthy and strong.

Frank, an indifferent student himself, was inspired by the freedom of the educational curriculum offered by his aunts. He’d chafed against the rigidity of formal academic requirements. Among the students to attend the Hillside Home School were the architect’s sons Frank Lloyd, Jr., and John Kenneth as well as the three children of Robert La Follette.

The school closed in 1915. Nell and Jenny ran it for its entire existence. The school’s buildings were later repurposed as a school and studio for architecture students on the grounds of Taliesin.