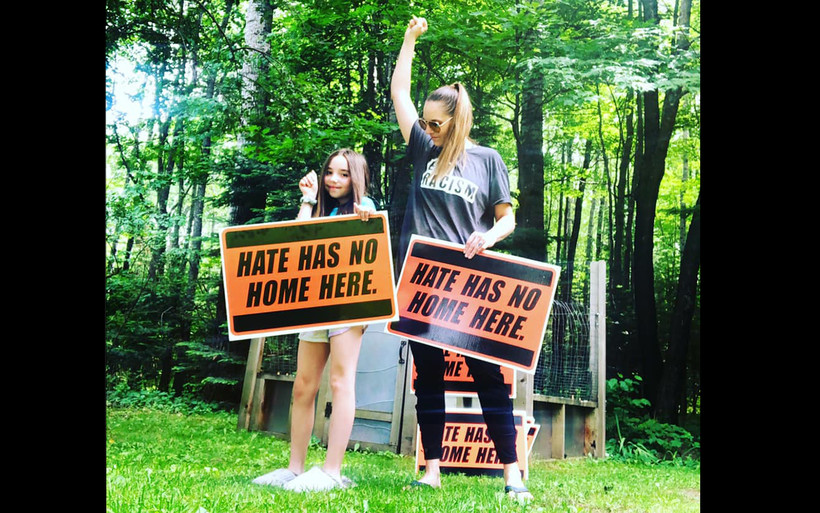 Chelsea Romaker and her 8-year-old daughter Eliana display the "Hate has no home here" signs they created after a man was photographed wearing a KKK robe in public in Vilas County. Photo courtesy of Chelsea Romaker

Photo Of A Man Wearing The White Supremacists' Robe On A Rural Road Has Spurred A Community Response
By Rob Mentzer
Share:

A widely shared photo of a man wearing a Ku Klux Klan robe and hood on a rural road in the Northwoods has spurred a community response. In Vilas County, one woman is distributing signs to her neighbors and others who want to counter the man’s message of hate.

The photo showed a man with his dog on the side of a rural road in the town of Conover, wearing the costume of the white supremacist terrorist group. Vilas County Sheriff Joe Fath confirmed to multiple media outlets that the man, named Charles Michael Booth, had donned the robe and hood and was waving at passing traffic. He was not violating any laws, Fath said, and Booth was not arrested.

But the image was shared by media outlets across the state and beyond. Chelsea Romaker, who moved with her family from Madison to St. Germain about five years ago to be closer to her grandparents, said the image disturbed her. Even more disturbing, she said, was the message it sent to others.

"I heard from a friend that she had a biracial family call and ask if it was safe to come here," Romaker said. "It absolutely broke my heart, hearing that."

Romaker is co-owner with her husband of the metal fabricating company Caged Crow Customs. She created vinyl signs that say, "Hate has no home here," and she's distributing them to anyone who wants one.

"I couldn't sit back and be silent," Romaker said. "There had to be a counter-message." 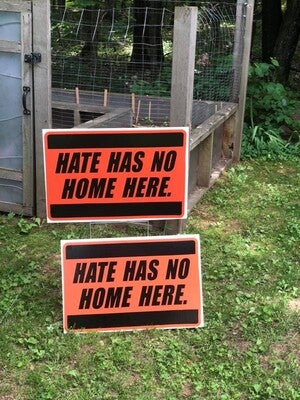 Chelsea Romaker created "Hate has no home here" signs after a man was photographed in Vilas County wearing a KKK robe and hood. Photo courtesy of Chelsea Romaker

Romaker's effort is the broadest, but she has not been the only person to speak out. At a June 16 town meeting, the chairman of the town of Conover, George Champeny, said "the behavior of this individual is horrifying and wrong. We as a community need to stand up to this behavior and reassure visitors and each other that we have one another's back — regardless of race, sex, social economic situation, sexual orientation or history."

Fath, who received criticism after he said in one interview that the display on a rural road "should not have bothered anybody," followed up the next day with a press release that condemned the action. "The KKK beliefs run contrary to Vilas County Law Enforcement's mission, values and beliefs," it said. "We strongly discourage this type of actions in Vilas County. We will be vigilant and continue to monitor this man's actions."

Romaker said she's given out about 30 of the signs, mostly selling them for $5 apiece, in the two days since she announced the project on Facebook. She’s ordered more signs, and she had someone give her a donation to fund the project, so anyone who wants one can have one whether or not they pay. And she says they’ve gone to people in the community across the political spectrum.

She said she hopes the incident will be a spark to the community to fight racism in all forms.

"That one incident is not our community," she said. Helping to spread the signs "will hopefully provide a more positive light (on the area) than this one negative incident from one guy."

Black Americans And The Racist Architecture Of Homeownership
Ramping Up Its COVID Response, EU Will Buy Up To 1.8B Doses Of Pfizer Vaccine
Duck Tales: Man Uses Naval Skills To Get 11 Ducklings Down 9 Stories
Opinion: As NPR Turns 50, Scott Simon's View From Behind The Microphone
David Swensen, The Greatest Investor You Maybe Never Heard Of, Leaves Powerful Legacy