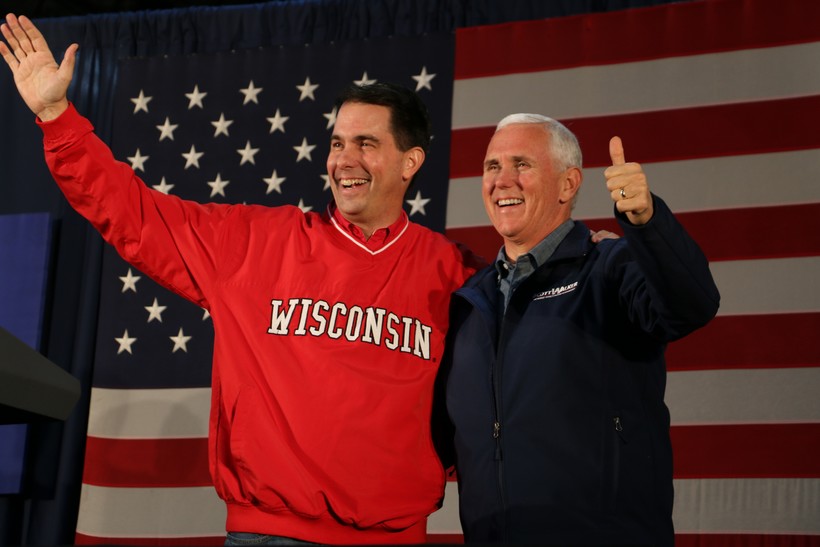 Pence said despite predictions of a Democratic "blue wave," he was confident Republicans would make history during the election Tuesday.

Pence took the stage around 2 p.m. at the Valley Cartage warehouse in the business park outside downtown Hudson. Prior to his arrival, several Republicans — including Wisconsin Republican Party chair Brad Courtney, U.S. Rep. Sean Duffy, Lt. Gov. Rebecca Kleefisch, Vukmir and Walker — warmed up the audience.

Vukmir spent her time on the stump by outlining her early support for President Donald Trump and her willingness to work with him on securing the United States-Mexico border and reforming health care. She said her opponent, Democratic U.S. Sen. Tammy Baldwin, supports a government takeover of the nation's health care sector, calling it a "socialist fantasy."

Despite her confidence, Vukmir was trailing Baldwin in the last Marquette University Law School poll. Among those surveyed, 54 percent favored Baldwin while 43 percent backed Vukmir.

Walker spoke just before Pence, telling the crowd his race was as close as it could possibly be with the same poll showing him and Democratic challenger Tony Evers tied at 47 percent support among respondents. The governor said the only reason the race is a tossup is because Democrats have been lying about his stance on providing health insurance coverage for people with pre-existing conditions.

Evers has hit Walker for his refusal to withdraw Wisconsin as a party to a lawsuit pushed by state Republican attorneys general to block the Affordable Care Act. Walker told supporters in Hudson that Wisconsin can protect people with pre-existing conditions without supporting "the failure that is Obamacare."

When Pence took the stage, the crowd roared.

He implored them to support Walker and send Vukmir to the U.S. Senate in order to keep momentum behind both Trump's and Republicans' agenda. Pence also credited Walker as a driving force behind the creation of the North American Free Trade Act replacement, known as the United States, Mexico, Canada Trade Agreement.

"I was there every step of the way as this president was renegotiating our trade relationship with our neighbors to the north and the south, and your Gov. Scott Walker was there every step of the way as a champion for the kind of changes in that U.S.-Mexico-Canada agreement that would not only defend dairy in Wisconsin, but defend our businesses large and small," said Pence. "Wisconsin and America owe Gov. Scott Walker a debt of thanks and gratitude for his strong stance on American jobs and American agriculture."

Just before closing out his speech, Pence dismissed talk that Democratic momentum could produce a "blue wave" that causes Republicans to lose control of the U.S. House of Representatives and governorships around the country. He pointed to Trump's election upset in 2016 as proof that predictions and polls can be misleading.

"We made history in 2016," said Pence. "We're going to make history again in 2018 when we reelect Gov. Scott Walker and send a strong conservative majority back to Capitol Hill."

The Hudson trip was Pence's second visit to Wisconsin in recent weeks.

Both Walker and Evers have been crisscrossing the state in barnstorming bus tours in the final days leading to the election.