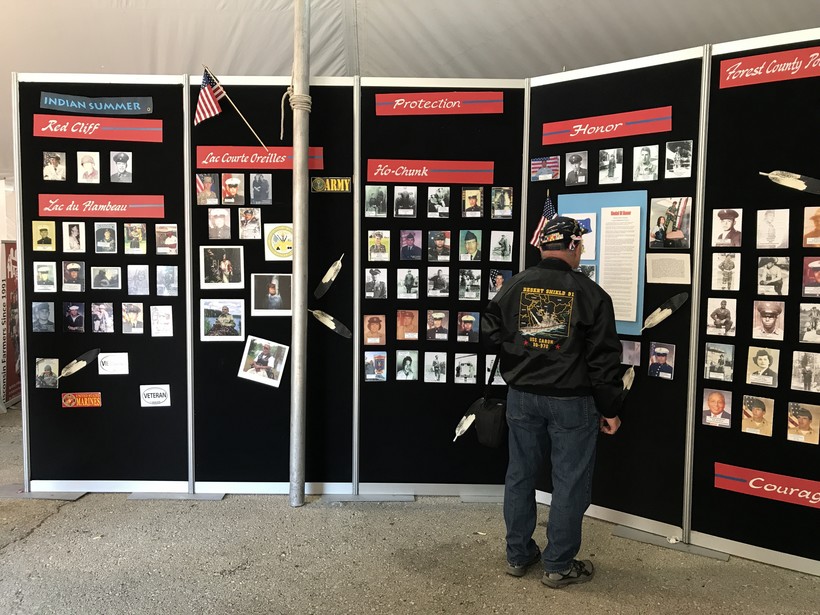 A man examines a veterans display at the Indian Summer Festival in Milwaukee on Sept. 9, 2017.
Amanda Magnus/WPR

More Native Americans Serve, Per Capita, Than Any Other Ethnic Group
By Gretchen Brown
Share:

The eagle has long been a symbol of American patriotism. But long before that it was a sacred symbol for indigenous Americans, tied to the creation of earth itself.

To be granted an eagle feather is an honor. The recipients are often combat veterans.

In fact, veterans are highly regarded within Native American tribes, Metoxen said. More Native Americans serve in the United States military, per capita, than any other ethnic group.

Metoxen is a 20-year U.S. Air Force veteran, and still remembers receiving his first eagle feather while home on leave from being stationed in Spain.

When veterans return home to Native communities after serving in the military, they often return with an elevated social status, Metoxen said, leading the grand entry of the color guard before each pow wow, for example.

"The vets bring in their eagle staffs," Metoxen said. " ... Each veterans organization will have one. It’s like the American flag, if you will. We had those before the American flag. And they’re all different, every tribe’s got a different way that they will do a staff. Some have an eagle head on top of it, some will have deer antlers on theirs, on top of it. And then they’ll have a streamer, eagle feathers coming down it."

Each tribe has a different ceremonial protocol. In the Ho-Chunk Nation, for example, if an eagle feather is accidentally dropped in a ceremony, a combat veteran will pick up the feather.

"The combat veteran that picks up that feather, he must tell his story, his combat story," Metoxen said. "So it can be an emotional event for a veteran when it does happen."

Metoxen has worked with veterans for nearly 15 years. At first, he primarily served Vietnam veterans in the Oneida Nation. But soon, he found himself locating Korean and World War II veterans, many of whom had initially been denied the veteran’s benefits they were entitled to.

"They landed in Normandy, for instance, they walked across Europe. These guys were really warriors," Metoxen said. "But when they applied for their benefits, they were told 'no,' and they just took that as, 'No means no, I’m not entitled to it.'"

About 44,000 Native Americans served in World War II alone. That’s nearly 13 percent of the entire indigenous population at that time. But Native Americans have served in the U.S. military since the Revolutionary War, before they were even granted U.S. citizenship.

Native Americans were only granted citizenship after World War I, and even then were not fully recognized as citizens by some states until the 1965 Voting Rights Act.