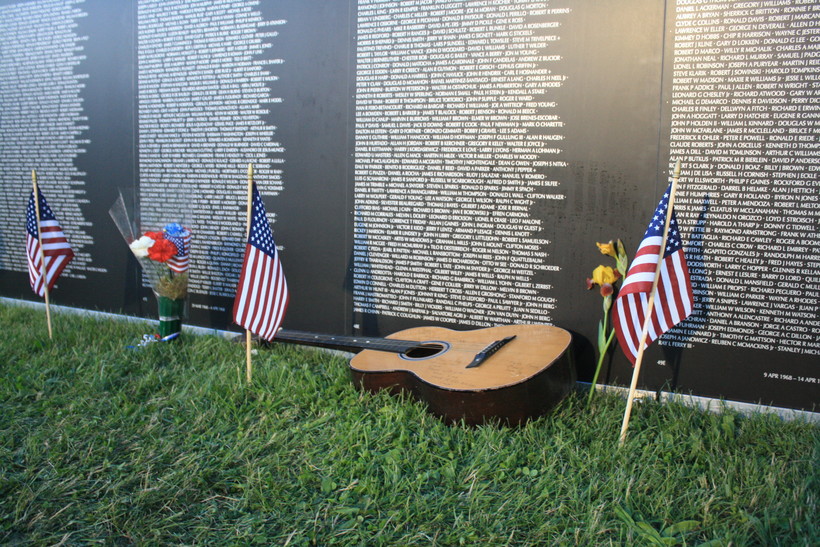 Veteran And Professor Share Story of Vietnam War Through Music

How do you fathom the experience of fighting a war? For two Madison authors, it’s with the music of the era and soldiers’ unique experiences of those songs — from songs protesting the war, songs supporting it, and songs that were never intended to do either.

Doug Bradley, a Vietnam veteran and former Army journalist, is co-author, along with University of Wisconsin-Madison Afro-American studies chair Craig Werner, of a new book exploring what music meant to soldiers fighting in the Vietnam War.

The pair spent more than seven years researching the book and speaking with veterans about their experiences with songs during the war. They've compiled a playlist of 20 "significant" songs from the era, though also cautioned that the interviewees had so many different songs to talk about that a truly representative list would have had to contain closer to 200.

But Werner said music did much more than that: Not only did it connect soldiers to their home and relationships they'd left behind and the hope of returning some day, it also helped them connect and form communities with their fellow soldiers.

Music also played a role in how they interpreted what was happening to them, Werner said.

"It provided a way of making sense out of experiences that often didn’t make any kind of sense at all," Werner said. "And then when they returned to the United States, music frequently played an active and central role in the way that they survived and, in the long run, healed the things that they’d experienced.”

Werner and Bradley named their book after the song "We Gotta Get Out of This Place" by English rockers The Animals, which the pair said became one of the most significant songs for soldiers fighting the war.

While the Newcastle-born band performed it initially as a celebration of their escape from working class origins, the song’s refrain of, "We gotta get out of this place, if it’s the last thing we ever do," was something the soldiers, living the horrors of war, instantly made their own.

Bradley said that live bands playing for soldiers in Vietnam, especially cover bands, were practically expected to know it.

"The joke was that if a cover band … couldn’t play 'We Gotta Get Out of This Place,' they got kicked off the stage," he said. "This was our anthem."

"These Boots Are Made For Walkin’" by Nancy Sinatra was another song that many soldiers brought new meaning to in Vietnam. For veterans Werner and Bradley interviewed, the song evoked the seemingly endless walking they did through the jungle.

"Leaving on a Jet Plane" by John Denver, spoke to soldiers and their families about the pain of separation prior to service, according to Bradley and Werner.

Other songs, especially those that were pro-war, brought up a more complicated set of feelings for soldiers.

For example, Staff Sgt. Barry Sadler, who served as a medic in Vietnam, wrote the "Ballad of the Green Berets" as an ode to the military’s role. Many embraced the song as a call to arms, and it was the most popular song of 1966, Werner said. One Wisconsin veteran interviewed for the project even compared it to UW's fight song, "On Wisconsin."

"We were going to march through the field and get to the goal line and win the war and stop Communism, get the touchdown," said Werner, paraphrasing the soldier.

But military servicemen and women in other branches, such as the Navy, widely parodied the song, and it became a running joke.

For that Wisconsin veteran, his whole perspective changed when he enlisted and arrived in Vietnam.

"Once he got there and saw what was going on and was on the ground himself, it had a whole different meaning to him. It sounded hollow," Werner said.

The political turmoil surrounding the end of the war, he said, had created a distance between soldiers and civilians that encouraged silence and, for many veterans, deepened the wounds they carried home with them.

"The reality is that a lot of these guys went and didn’t go willingly, but they went and they did their duty and they came back — and the country just did not want to hear about their experience," Bradley said. "We have 58,000 names on the (Vietnam War Memorial) wall, we pay respects to them and honor their service every day, but there were as many or more who came back that we could have saved if we’d reached out a little bit more — and they’re not with us either."