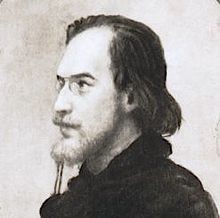 Erik Satie was well known for his eccentricity by June 1920 when his ballet La Belle Excentrique turned up on the stage of the Théatre des Champs-Elysées in Paris. He had a devoted following among composers and other artists in the know, but was all too familiar with the complaints of audiences and the barbs of critics, one of whom he had battled with his fists and walking stick.

Elizabeth Toulemon, known to friends as Elise and as Caryathis onstage, was to do the dancing. After several false starts in her search for a costume, she asked Jean Cocteau to come up with something, saying, “You know, Jean, Satie is clarity, order, and reason personified. He knows how I ought to be dressed, extravagantly, of course, but intentionally absurd.” Cocteau obliged with a skirt of multi-colored tulle, long sleeves, diamond-studded shoes, a heart-shaped patch of black velvet in a “strategic position,” and a black velvet corsage. The outfit hid all of Elise’s face except for her heavily made-up mischievous eyes and, fluttering up from her hip, was a white ostrich feather curling into a question mark.

Satie thought it was just the thing.

As Elise danced to the music of various French composers, someone at the back of the theater, later identified as artist André Derain, shouted, “What a shame the costume looks like a public lavatory!”

And then came Satie’s music for La Belle Excentrique. “The Waltz of the Mysterious Kiss in the Eye” was to be “very exaggerated,” perhaps as a spoof of music hall numbers. There was a “Grande Ritournelle” before which the dancer was to “vamp until ready,” a “Franco-Lunar March” with a nursery tune running through it; and a “Grand Worldly Cancan” that brought up the rear.

Elise became so identified with her role that she titled her autobiography The Joys and Sorrows of a Belle Excentrique, and maintained that she alone had understood Erik Satie, whom she called “the exceptional man, so different from all who surrounded him.”