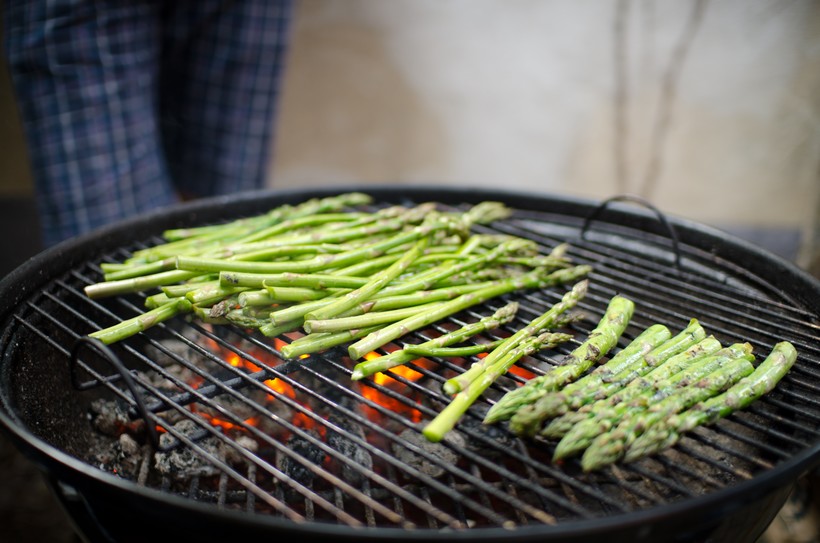 Grilling vegetables might seem intimidating, but there’s nothing easier.

Mathewson and Merrill say you can grill just about anything for great results. Take carrots, for instance.

"Carrots are phenomenal on the grill," Merrill recently told WPR’s Larry Meiller. "Grill them just like you would a hot dog."

With a laugh, Mathewson adds, "You vegans out there, you can use carrots instead of a hot dog."

Vegetables don’t need to be a replacement for meat. But they can hold their own on the grill when you have a chance to dial up the flavor.

Mathewson and Merrill offered a few suggestions of vegetables to throw on the grill.

The spring vegetable is one of the pair’s go-tos. Grab about a pound and a half and stick it in a Ziploc bag.

Dice up some fresh dill and throw it in the bag along with the vegetable. Then, squeeze an entire orange over the top, and a bit of olive or sunflower oil. Marinate it for an hour, then throw it across the grates of the grill. It only needs about two to three minutes of grilling per side.

Green beans are also great on the grill. Tackle these the same way you’d approach asparagus, Merrill said, maybe with lemon and lime in the marinade instead of orange.

You can grill green beans by carefully laying them across the grill grates. Or, you can purchase a grill mat or grill plate to throw them on.

Again, it should only take three to four minutes per side.

Beets, at first glance, may seem a little out of the box to grill. But grilling dials up the sugar taste just enough to make them taste incredible.

The key here is size: go for slightly smaller beets, baseball-sized or smaller, rather than larger beets.

"When you cut into them, the steam just rolls, and they shine on the inside," Merrill said.

If you don’t like Brussels sprouts, you probably just haven’t tasted them on the grill, the pair say.

Marinate them in a ziploc bag with some Italian dressing. Then, roll them around on the grill for 15 minutes or so over medium direct heat. Be careful not to overcook them!

"Any vegetable that comes off the grill individually ... you're getting the true flavor of the vegetables," Merrill said. "And they’re phenomenal, they really are."