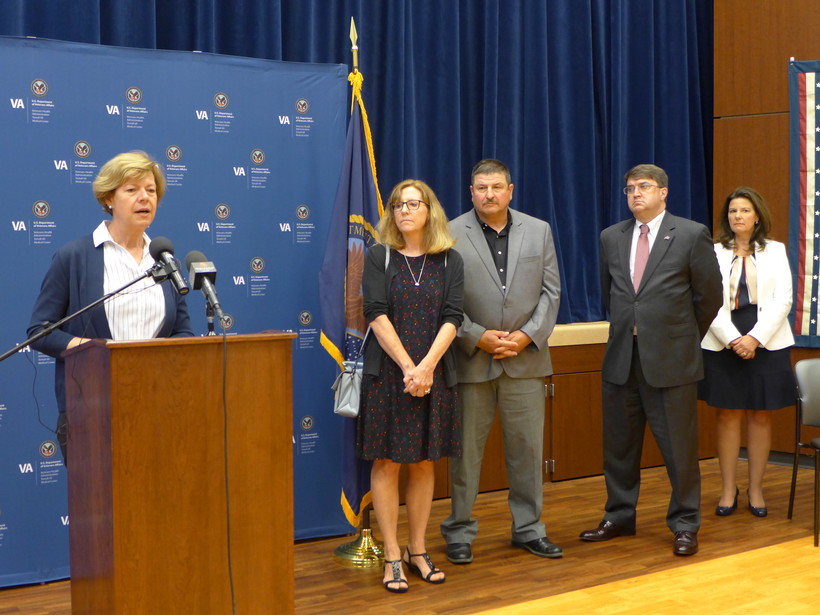 Secretary Robert Wilkie applauded the Tomah VA’s efforts to provide alternatives to opioid painkillers during a visit to the facility Tuesday.

He was joined by Wisconsin U.S. Sen. Tammy Baldwin and Marv and Linda Simcakoski, the parents of a Marine Corps veteran who died at the Tomah VA in 2014 from a mixture of drugs prescribed by VA doctors.

Wilkie said the facility has made important reforms since Jason Simcakoski’s death, including the creation of a Whole Health program that uses alternative treatments like tai chi and aromatherapy.

Wilkie said his agency is now working to implement the Whole Health program across the VA health care system. And he said the department has already made strides in reducing opioid use.

"The VA, because of Tomah, has reduced the prescription rate of opioids across America by 51 percent. In the last year, veterans have returned 124 tons of opioids back to us and we’re offering them a new way forward," Wilke said.

Marv and Linda Simcakoski thanked VA leadership and Baldwin for continuing to work on the issue.

"Today was a special day and it showed that we have a lot of people who really do care about alternative therapy for veterans," said Marv Simcakoski during a press conference.

Baldwin said the Tomah VA has become "a flagship medical center within the VA" for approaching veterans' pain in a more holistic way.

But she pointed out some veterans are receiving care outside of the VA system, especially under new policies created through the VA MISSION Act.

"We have to make sure that all that we’ve learned within the VA about safely prescribing opioids and about presenting veterans with alternatives for their pain treatment is applied in the private sector too," Baldwin said.

Earlier this year, a VA Office of Inspector General investigation didn't substantiate new allegations of unsafe prescribing practices at the Tomah VA. Facility leadership said the findings highlighted how far the medical center has come since 2014.

Baldwin said she thinks next steps for the Tomah VA should be to expand the Whole Health program to other areas, including mental health.

"How do you reach the veteran who may not self-present here and yet could benefit from the Whole Health approach? Veterans who may be experiencing mental illness, addiction issues, and who might not ever end up on the doorstep or through the gates here," Baldwin said.

She said these practices could also help new efforts within the VA system to work on suicide prevention.