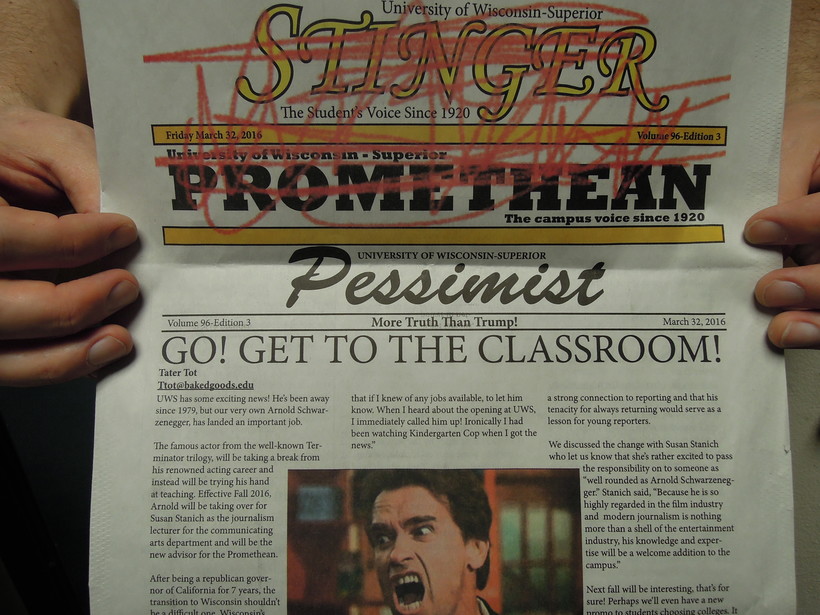 The April Fools' Day edition has come under fire from students, alumni and community members for satirical articles, including terms some deem derogatory towards women, races and religions.

A student has filed a complaint against the University of Wisconsin-Superior’s campus newspaper, The Promethean, over articles written in its April Fools’ Day edition.

"One story in particular was about a Jewish man and it used a lot of vulgarity. Not only vulgar words that everyone would recognize, but derogatory terms that people who are of the Jewish faith and Jewish lineage would understand," she said.

The headline for the story Cheslock refers to reads "Area Jewish Man Doesn’t Know How The F*** He Got Here." She also took issue with a section on pickup lines that included phrases such as, "You must have a mirror in your back pocket, because I can see me in your pants!"

Cheslock reached out to the newspaper’s editor-in-chief and advisor to discuss her concerns with the issue, but she said they refused to meet with her. Marcus White, editor-in-chief of the student newspaper, released a statement to the campus community about the edition when it was circulated.

"Some might say what we have published is an abuse of the First Amendment. They might be right. Our abuse though is one of satire. And while satire has basis in reality, it is still a fabrication," White wrote in the statement.

Susan Stanich, the paper's faculty advisor and communicating arts professor, responded to Cheslock's request to discuss the edition in an email. Stanich wrote that she understood Cheslock's dislike of the issue.

"But then there's that legal right that keeps getting in the way, protecting you as well as me and everyone else. It's not only valuable, it's essential in a free society. We need to safeguard it with vigilance and push-back. And push-back is what the April Fool's issue was all about," she said.

Stanich added she welcomed a community discussion on freedom of the press, culminating in a campus forum attended by Stanich and White at UW-Superior last week. Cheslock maintains the editors are hiding behind the First Amendment, adding that people can discuss important issues without being mean.

April Fools’ Day editions are commonly criticized by campuses across the nation, according to Frank Lomonte, executive director of the Student Press Law Center.

"People like to push boundaries and humor itself often depends on walking that line between offensiveness and funny," he said. "Sometimes people lose that tightrope battle."

Student government at State University of New York's Buffalo State froze funding for the student newspaper, The Record, after its April Fools’ Day edition last year, but the decision was later reversed. Another student newspaper at the University of Virginia issued an apology last year after its April Fools’ Day edition. Students complained some satirical stories were racist.

A 2013 April Fools’ Day edition resulted in a sociology professor filing a sexual harassment complaint against the student newspaper at the University of Alaska Fairbanks. The complaint was in reference to a satirical story about a campus building that resembled a vagina, but an outside investigation concluded it was protected under the First Amendment.

Meanwhile, UW-Superior is investigating the complaint with assistance from UW System’s legal counsel, according to UW-Superior spokesman Dan Fanning.

"We certainly respect the students who are involved with the newspaper and their right to have free speech," said Fanning. "At the same time, we’ve heard from so many students, alumni and community members and they see what we see. Even though that might have been meant to be satire … it clearly wasn’t funny to everyone, that it offended some people and that it crossed some lines that should not have been crossed. The university condemns that."

On UW-Superior’s Facebook page, some alumni said the newspaper’s stories sounded "distasteful" while others questioned whether the university’s reaction bordered on censorship.

Mark Erb, assistant editor-in-chief for The Promethean, said he stands by the April Fools’ Day edition.

Cheslock wants the editors to apologize for the April Fools’ Day edition, but intends to follow through on her complaint regardless. She wants to prevent similar editions whether that involves removing the editor or eliminating the use of satire.

"Although offensiveness may be unpleasant to people, offensive speech our courts have told us over and over again is still protected by the First Amendment," said Lomonte. "There’s no constitutional right to be protected against offense."

Editor's Note: Marcus White is a news intern in the Superior bureau of Wisconsin Public Radio and has collaborated with this reporter in the past..