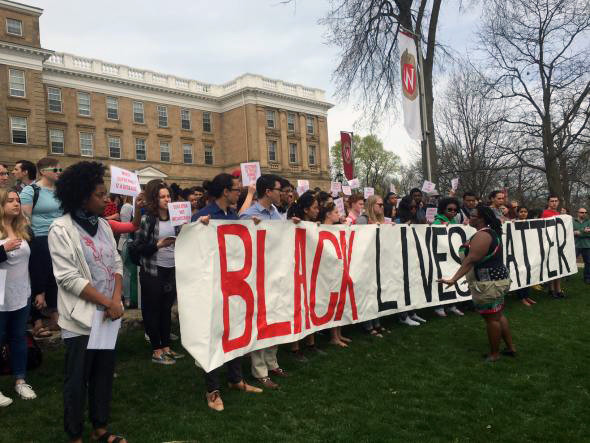 Student protesters gather in front of Bascom Hall on Thursday.

Hundreds of University of Wisconsin-Madison students marched through campus Thursday, chanting "education, not incarceration," to protest the arrest of a student for his alleged role in spraypainting graffiti art around campus.

Officers with the UW-Madison Police Department pulled Denzel McDonald — who prefers to go by the name King Shabazz — out of class last week and arrested him on 11 criminal counts of vandalism and one count of disorderly conduct. King, a black man, is accused of spraypainting messages like "Racizm in the air dont breathe" and "White supremacy is a disease."

"It was a supreme violation of this student's rights, and the right of any person to pursue an education, for UWPD to barge into a classroom," said junior Hiwot Adilow, who attended the march.

Chancellor Rebecca Blank and the campus police issued apologies for the class disruption. The protestors are calling for all charges against King to be dropped and for a restructuring of the campus Police Department.

The protesters taped a full list of demands over an Abraham Lincoln statue on campus: