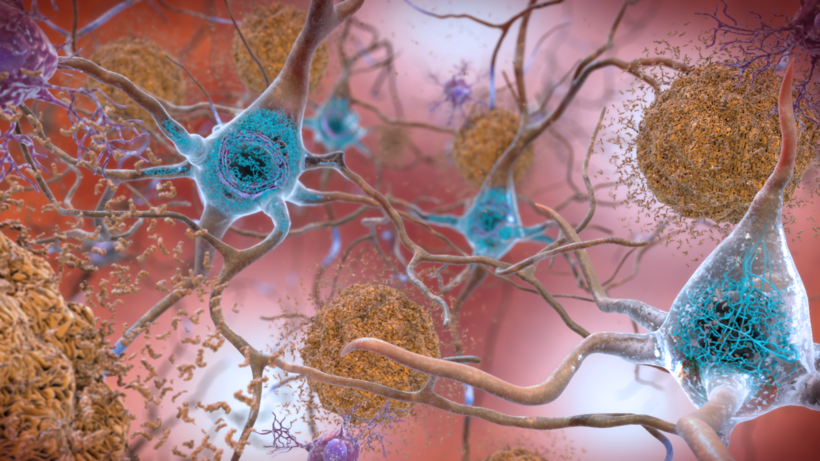 In the Alzheimer’s affected brain, abnormal levels of the beta-amyloid protein clump together to form plaques (seen in brown) that collect between neurons and disrupt cell function. Abnormal collections of the tau protein accumulate and form tangles (seen in blue) within neurons, harming synaptic communication between nerve cells. NIH Image Gallery (CC BY-NC 2.0)

The number of Americans affected by Alzheimer's disease and related dementias is expected to more than double by 2060, according to the Centers for Disease Control and Prevention, and one research group in Milwaukee is studying why its impact on women is greater than men.

As the population ages, the number of Americans with Alzheimer's disease is projected to grow to 13.9 million in 2060 from 5.7 million in 2018. About two-thirds of those affected by the memory-related disease are women, said Karyn Frick, a psychology professor at the University of Wisconsin-Milwaukee.

Frick is leading a team to study how women are impacted by the disease that scientists think has something to do with the build up of proteins in the brain.

"We're working on the female piece of the puzzle, trying to understand why women are at greater risk for the disease," she said.

Frick said that Alzheimer's disease's greater occurrence within women might be linked to menopause, which impacts the hormones produced by ovaries.

"It turns out that (the hormones) are very important chemicals to keeping brain cells healthy," she said, reassuring that going through menopause does not guarantee an Alzheimer's diagnosis.

Frick said her team is trying to understand how those hormones are affecting memory on a cellular level, to potentially identify molecules that can be targeted by future drugs.

Now, most drugs that target the disease can manage some symptoms, but only for a relatively short time, Frick said. But there's no treatment to stop the disease or even to reduce some of the cognitive symptoms.

"There's never, ever been a survivor of Alzheimer's disease and we want to change that," she said, referencing similar statements made by the Alzheimer's Association.

The disease is affected by a build-up of proteins that is much more prevalent in a brain plagued with Alzheimer's disease than in a brain that goes through normal aging, Frick said.

Genetic mutations appear to play a role in those who get Alzheimer's at an earlier age, such as in their 40s or 50s. In older adults with the disease, there's a genetic risk factor linked to a specific protein, and those with a variant of that protein are more likely to get the disease, especially if they're women.

Frick said the research field has primarily been focused on trying to get rid of those proteins, but haven't been entirely successful.

"Some of the most recent clinical trials trying to decrease levels of this amyloid protein in the brain haven't worked out all that well, particularly in patients who already have the disease," she said.

She said without a solid success rate with that treatment, researches have begun to seek out other causes, such as environmental, hormonal and genetic.

"I think people are very open to thinking outside of the box," she said.

By the time patients start to show symptoms of the disease, such as memory loss or confusion, Frick said changes have been happening in the brain already for 10 to 20 years. Researchers are now looking into biomarkers, or clues to determine whether a patient does indeed have the disease.

Right now, tests can show plaques in the brains of Alzheimer's patients, but they're expensive. Frick said researchers are making strides toward a blood test that can show those elements of the disease, and it could be within five or 10 years that such a test will be available.

For now, people are encouraged to exercise to help prevent the disease, which Frick said keeps oxygen flowing through the brain, because the organ can't actually store it.

"We need to get blood pumping to our brains in order to keep them healthy," she said.

Although it might be years before discoveries made in the laboratory translate to drugs that help patients or inform clinical trials that eventually make a difference, researchers are still hopeful.

"We always have to be optimistic and have that hope that this work will will ultimately lead to something that will benefit people's lives," Frick said.