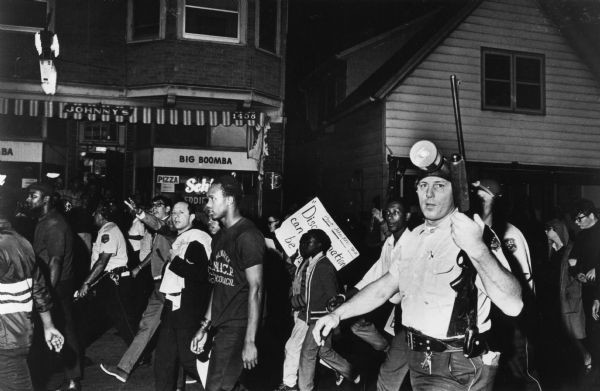 It’s Been 50 Years Since Protesters Took To Streets For Fair Housing Laws
By Nina Kravinsky
Share:

Will Tchakirides wants to make sure the stories of those leaders aren’t forgotten. Tchakirides is a PhD candidate at the University of Wisconsin-Milwaukee and the oral history committee chairman for March On Milwaukee, a project that’s collecting the stories of people who participated in the marches.

The protesters pushed lawmakers to pass fair housing legislation in a city that — half a century later — continues to be one of the most racially segregated in the country.

"I think we need to remind people that Milwaukee was central to the fair housing movement," Tchakirides said. "They showed a certain level of determination in working toward their cause."

The first march was on Aug. 28, 1967, and more than 200 people marched from the city’s black north side to the white south side. The group was met by 5,000 counter protestors the first night. On the second night, 13,000 counter protesters showed up with racial slurs, bottles and rocks, Kristen Leffelman, field services representative at the Wisconsin Historical Society, previously told WPR.

Tchakirides and his team have collected more than 600 minutes of interviews with people who participated in the marches.

"It’s so powerful," Tchakirides said. "I’ve been studying Milwaukee civil rights history for almost 10 years. With each voice that we add to a project like this I learn something new about that struggle."

This project intends to dive deeper into the civil rights stories that often get overlooked. They’re especially looking for women, young people and people who worked behind the scenes during this time.

Tchakirides points to similarity between those stories and stories of youth organizers today. Today, young people are marching in the streets to protest gun laws and poor treatment of the black community. Tchakirides said women and young people powered the organizing back then as well.

"These were the people on the ground really making these things happen. A lot of this took place outside of the halls of politics, outside of the spotlight in the basement of churches, it took place in community centers," Tchakirides said.

Tchakirides and his team reached out to those people using different listservs throughout Milwaukee, including from retirement communities and the Catholic church. Other participants saw the team’s posts on social media and reached out, many of them Milwaukee transplants who have moved.

Once the team is done with interviews, they’ll work with the Wisconsin Historical Society to organize the information. The project comes at a time when people of color are still fighting for many of the same basic rights — including fair housing practices — that they fought for in the 1960s, Tchakirides said.

"These are human issues," Tchakirides said. "These are people who want their humanity to be seen."

Tchakirides said the interviews will likely be available for the public by the end of this summer.