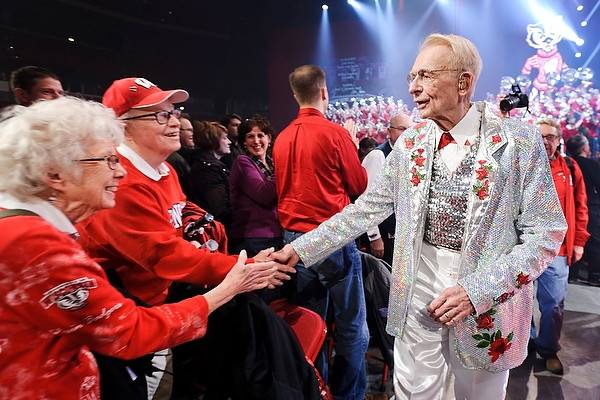 Whether it's at a Badger football game, their annual spring concert, or a Final Four basketball game, UW Marching Band Director Mike Leckrone knows how to entertain an audience. Photo: UW Varsity Band.

Throughout Wisconsin, It’s hard not to know that the University of Wisconsin-Madison’s men’s basketball team is playing in the NCAA tournament Final Four this weekend. The team is there, of course, and many fans will no doubt make the trip since it's within driving distance for many Wisconsinites.

Already in place to entertain spectators and encourage the team are members of the UW Marching Band, and their conductor, Michael Leckrone. He said that the NCAA caps the number of band members from each school at 30, “to even the playing field a little bit.”

Leckone and the band flew to Indianapolis with the basketball team on Wednesday, and band members were taking in some of the local sights, like the Indianapolis Motor Speedway on Thursday. They got down to work as well, though, as they played at the Fan Fest later on April 2.

“Then, as we get nearer to game day, the activities increase. We have two or three performances (Friday), and it becomes a little bit non-stop after that,” Leckrone said.

The band and the team are staying in the same hotel, and Leckrone said that there are a lot of chances for interaction. The athletes and musicians get to know each other quite well after this kind of event, he said.

“None of the kids in the band (here now) experienced the Final Four last year, so it’s a great time for them to drink this all in, because it really is exciting,” Leckrone said.

Leckrone became conductor of the UW Marching Band in 1969, so he has seen his share of Badgers basketball and football teams play as the band has traveled to support them. He said that wherever they are, the band is well-received and appreciated.

“Not just from the Badger fans, either. I think one of the things we pride ourselves on is the fact that we think music is fun. And that rubs off on a lot of people because they can sense that. We get a lot of great comments from local people who maybe have never seen the band before. That’s part of the fun of traveling like this,” Leckrone said.

A Badgers win against Kentucky means a berth in the final on Monday. Leckrone said that the band will be there to play them to victory.

“We’re going to stay as long as the team does, and we hope that’s until sometime very late on Monday night,” Leckrone said.