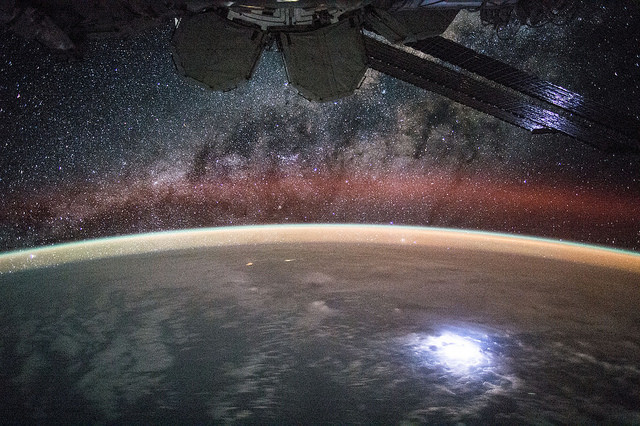 UW-Madison Study: Milky Way May Be Floating In A Cosmic Void

A new study by astronomy professor Amy Barger and her colleagues at the University of Wisconsin-Madison has found the Milky Way Galaxy may be in the center of a large cosmic void.

You might think of the universe like "cosmic Swiss cheese," with the Milky Way situated in one of its holes, said David Eicher, the editor-in-chief of Astronomy magazine.

Some parts of space are more dense than others, and if this new research is correct, the Milky Way may be smack dab in the middle of a relatively empty portion of the universe. But even less dense areas of space have a lot going on.

The Milky Way — our home galaxy — is part of a cluster that has at least 54 galaxies. There are about 1,300 in the Virgo Cluster, which is "very close to us, just a few tens of millions of light years away," Eicher said.

And the Laniakea Supercluster, which includes the Virgo Cluster, has about a 100,000 galaxies in it, he said.

"We’re not super lonely and all alone here," in the Milky Way Galaxy, Eicher said. But we are in a very low-density area of space, near the center of a larger low-density bubble. "This hole, if you will — a hole in the Swiss cheese that’s maybe about 1 billion light years across — so that’s a huge amount of space with lots of galaxies in it," he said.

This also plays out on a smaller scale within our own galaxy. And our place on the margins may actually be a good thing.

"We’re also kind of out in the fringe of our Milky Way, just looking at our galaxy itself. And that keeps us away from the center, where there’s a lot of danger. There’s a super massive black hole, there’s antimatter, there’s all kinds of bad stuff going on in the center of our galaxy," Eicher said.

"It’s good to be out in the quiet suburbs" of space, he said.