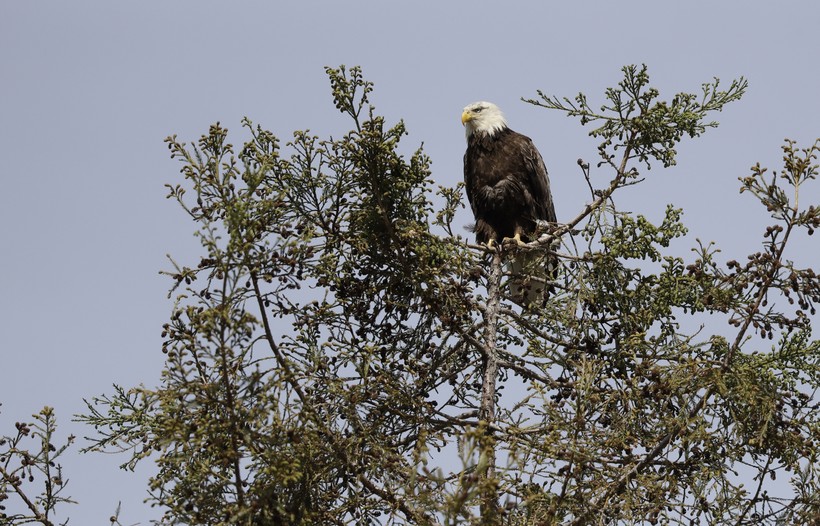 Scientists at the University of Wisconsin-Madison knew the bald eagle population grew by leaps and bounds over the last 50 years. They just didn’t know why.

"One really important strategy that a number of agencies started implementing really around the 1960s, was the use of what was referred to as these buffer zones around nest sites," said Ben Zuckerberg, an associate professor of forest and wildlife ecology at the UW-Madison. "Agencies would set up areas that would generally restrict human activity."

The idea was that any human disturbance — things like hunting, hiking, fishing or boating — can agitate eagles. Scientists believed this could cause eagles to abandon their nests.

Looking back on that initiative, Zuckerberg and other scientists at UW-Madison wanted to see whether these buffer zones really made a difference in the overall eagle population. They teamed up with researchers from the National Park Service and U.S. Geological Survey to answer that question, focusing in on one location: Voyagers National Park, in northern Minnesota.

Beginning in the 1990s, the park had begun to set up buffer zones along a handful of eagle nests, which tend to be atop tall trees near open bodies of water.

"During the beginning of spring and into summer, they would set up these buffer zones once eagles had begun to establish these nests and start feeding their young," Zuckerberg said. "So they wanted to protect them from any kind of activities that might interfere with some of those breeding activities."

The park tracked individual eagle nests through surveys beginning in the 1980s, noting where eagles were nesting, how well they were doing, and if their nests were successful.

That kind of surveying made it possible for Zuckerberg and his colleagues to really see the change in population over time.

Those numbers seem small, but they add up.

Zuckerberg said the eagle population increased by nearly 40 percent between 1991 and 2016, after the buffer zones were put into place.

To Zuckerberg, the best part is that the buffer zone initiative was relatively simple and inexpensive.

"To me, this is a nice story in a sense that all of conservation is not doom and gloom," he said. "This recovery represents one of the continent’s most successful conservation stories. I think it also is an important tale in the sense that, when given support, both in terms of funds and environmental laws and protection, our conservation agencies can be very successful in what they do."