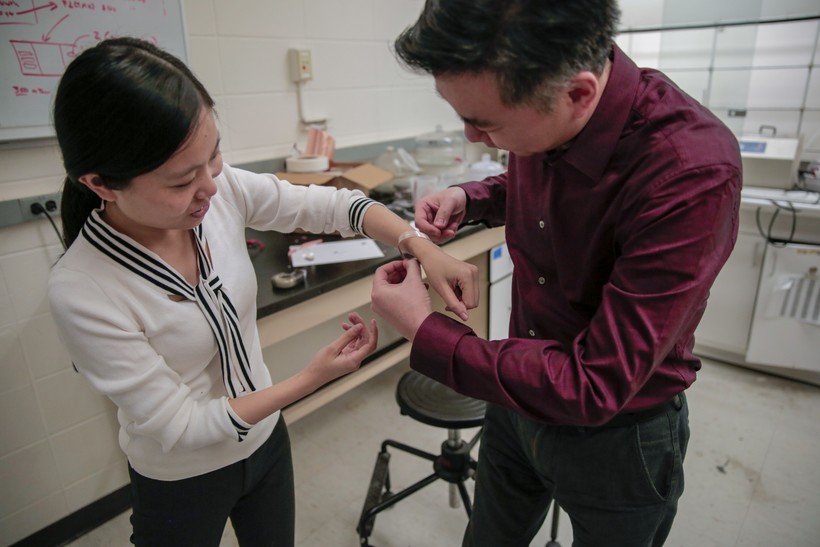 Bandages that promote quicker healing by harnessing the body's own energy may sound like science fiction, but researchers at the University of Wisconsin-Madison have recently developed just that.

These bandages use the body's movements to generate electrical pulses to help wounds heal quicker, and their development could have big implications for chronic wound care. Still, lead researcher Xudong Wang said it may take some time before human trials get underway.

Researchers, who have completed tests on rats, found rats whose wounds were treated with this type of electric stimulation healed in three days compared to two weeks of normal healing. The findings were published in the journal ACS Nano in late November.

"This was a big surprise to us," said Wang, an associate professor of material science and engineering at UW-Madison, who's hopeful human trials will begin within three years.

Electric pulses are delivered to wounds to help accelerate wound healing in a devices that's so far been tested on rats and found to reduce healing time from two weeks to three days. Photo courtesy of UW-Madison, Xudong Wang. The bandage has two components, explained Wang. The first is a nano-generator, which converts skin movements, such as ones caused by breathing, into electrical pulses. The nano-generators are attached to a band that would be worn around the patient's torso.

Those nano-generators feed gentle electric pulses to electrodes in a bandage that are placed on top of the wounded area, generating an electric field.

"Electric fields can facilitate the alignment and proliferation of fibroblast skin cells, which play a critical role for skin healing," he said.

The bandages will also be relatively cheap, Wang predicts. The materials for the process include uses polytetrafluoroethylene, commercially known as Teflon, to help with creating electric pulses; copper for the electrodes; and polyester.

Although Wang's lab isn't the first to use this type of method for fast wound recovery, previous methods have been clunky.

Wang said the next step is to study the effect on pig's skin, which is similar to humans.

He envisions that the bandages, when marketed, will be similar to those available in stores now, but with small components attached to them and electrodes to help advance the healing process.