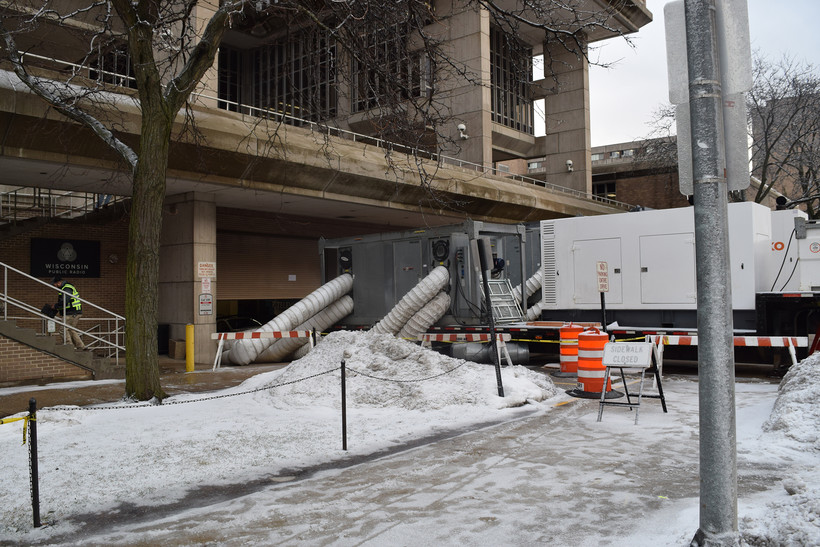 Facilities Leader Urges Increased Investment From Board Of Regents
By Phoebe Petrovic
Share:

When it comes to funding for facilities operations and maintenance, the University of Wisconsin-Madison lags behind other universities. The Board of Regents got briefed on the state of the system's flagship campus during a board meeting this week.

David Darling, assistant vice chancellor for UW-Madison's Facilities Planning and Management, told the regents that the university's facilities are "expansive, aged and fragile," and that problems are "increasing in frequency, severity and unpredictability."

He said UW-Madison has a backlog of deferred maintenance, a shortage of maintenance workers and lags behind peer institutions in preventative maintenance.

Preventative maintenance means getting ahead of big problems. Comparable universities — such as the University of Illinois, University of Minnesota and Ohio State University — spend about 10 to 12 percent of their operation and maintenance budgets on preventative measures. UW-Madison pays about one-third of that, approximately 4 percent.

Darling said last week’s polar vortex provided "incidental evidence" of the need for increased funding. The extreme cold and rapid thaw led to 30 weather-related incidents in 28 UW-Madison facilities, including its Chemistry Building and Vilas Hall. Darling said that while they’re investigating each problem individually, about half of these issues stemmed from "deteriorated condition or an underfunded maintenance."

Darling said these heaters could have been inspected more regularly.

"A preventative maintenance scheme would involve going around and inspecting this unit heater, verifying that it was in good operating condition, oiling its blower motor and verifying that its amperage is correct," he said. "Whether this unit heater failed during the incident, before or after is not clear today because we do not have enough money spent on preventative maintenance."

Other pipes burst due to insulation that had deteriorated over time.

As of Thursday, approximately half of the flooding or leaking incidents were still being remediated, and two, including Vilas Hall, were still significantly impacting classes, Darling said.

To match its Big 10 peers, UW-Madison would need to spend $16 million annually for 214 full-time employees.

Darling stressed the need for increased funding in his presentation to the Board of Regents and said UW-Madison needs an additional $21 million annually just to stop the growing backlog of maintenance projects. In total, however, the campus has approximately $1.5 billion of deferred maintenance.

"But that would just halt the growth of our deferred maintenance backlog," Darling told Wisconsin Public Radio.

In other words, it would take $21 million each year for UW-Madison to keep up with repairs.

"We have approximately $1.5 billion worth of deferred maintenance in aggregate," he said.

UW-Madison isn't alone in its facility problems. At the board meeting, Alexandria Roe, UW System associate vice president for capital planning and budget, detailed the need for increased maintenance funding across the system.

"Increasingly, facilities staff are called upon to take care of emergency problems," she said. "This diverts their manpower from doing routine preventative maintenance activities."

Most of the UW System's capital budget request, which totals $1.9 billion, "is for needed repair and renovation," according to a press release.

According to University Relations, over half of all buildings in the UW System were built between 1950 and 1980 and require "significant repair and renovation work to ensure continued safety as well as to support excellence in teaching, learning and research."

Editor's note: Wisconsin Public Radio is a service of the University of Wisconsin-Madison and the Wisconsin Educational Communications Board. WPR is also headquartered at Vilas Hall.