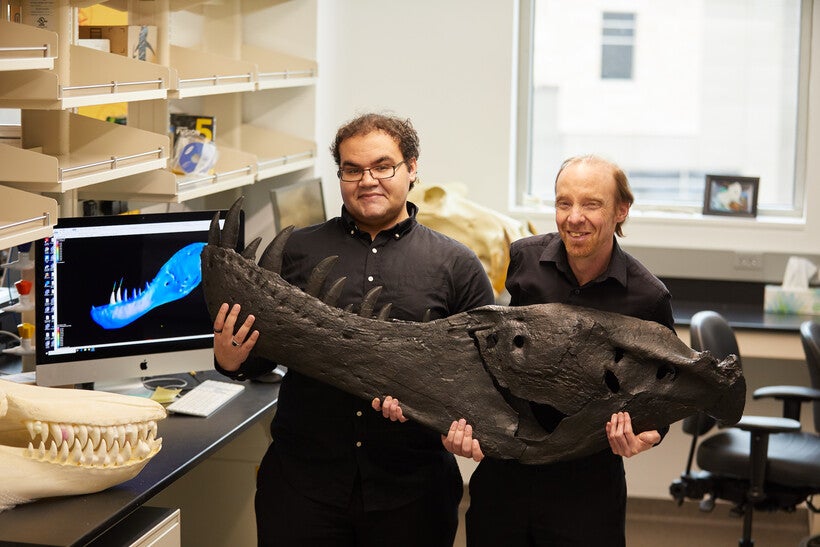 University of Wisconsin-La Crosse graduate student Andre Rowe, left, and associate professor Eric Snively hold a cast of the left lower jaw of a Tyrannosaurus rex. The image on the computer shows how a killing bite would affect the jaw. UW-La Crosse

New research at the University of Wisconsin-La Crosse highlights just how deadly a Tyrannosaurus rex was.

Eric Snively, associate professor of biology, co-authored a study on the T. rex's ability to turn in order to keep up with prey. He said the study started from the observation that the T. rex was more compact than its counterparts.

"It’s actually shorter from the tip of its snout to the end of its tale. And it also seemed to have really big bones where leg muscles attach," Snively said. "If it's shorter from front to back, that means it can turn more easily and if it has big muscles, that means they’re able to power that turn."

He said researchers are using living animals like birds to reconstruct the likely anatomy and behaviors of dinosaurs. Using the current understanding of dinosaurs’ musculature, Snively and a researcher from Oklahoma State University calculated the turning ability of several carnivorous dinosaurs.

Computer models of an adult Tyrannosaurus rex and two relatives, a juvenile Tarbosaurus and adult Gorgosaurus, compared to other dinosaurs in this study. UW-La Crosse

They found the T. rex turned twice as fast as other dinosaurs of the same body mass, regardless of how old the T. rex was.

"That kind of makes sense because Tyrannosaurus had little arms,"  Snively said. "They couldn't grab on to prey very well. So if you’re going after small or dangerous prey, it makes sense to be pretty agile."

He said scientists have already found evidence that T. rex attacked horned dinosaurs like Triceratops that would have been fairly dangerous. The new understanding of T. rex’s agility means it's likely the prehistoric predator was able to keep up with younger prey than other predators.

Snively said learning more about herbivorous dinosaurs’ ability to move is his next research goal.

"We’re going to see how well a Triceratops or a big duck-billed dinosaur could turn and bring the animals together in modern studies like they were in life," Snively said.