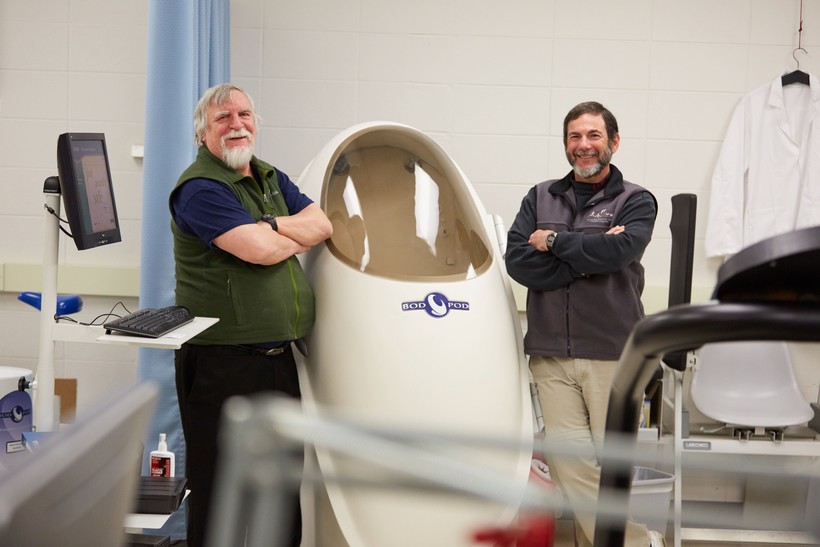 A University of Wisconsin-La Crosse professor has been added to the U.S. Speed Skating Hall of Fame. Carl Foster ice skates with Jos de Koning, professor from Vrije Universiteit Ansterdam, in the Netherlands in 2010. Foster and Koning worked together on a study of speed skaters at the 2002 Winter Olympics. Courtesy of University of Wisconsin-La Crosse

Carl Foster, professor of exercise and sports science, started working with professional speed skaters in the early 1980s as a clinical physiologist for Sinai Samaritan Medical Center in Milwaukee.

Originally from Texas, Foster said he didn't have any experience ice skating, let alone working with skaters on the U.S. Olympic team.

"In retrospect, there were about two or three athletes and two coaches in particular that I think made a big investment. They said 'We need someone who understands science,'" Foster said. "They put a lot of time into me, just in terms of talking to me about stuff and answering stupid questions that I was asking and being my friend."

Foster said much of his work involved helping coaches apply discoveries from clinical research, like how to help skaters recover more quickly after a race. He said that work helped define the role of sports scientists.

"The real relationship in athletics is athletes and their coaches. And really, the only thing a scientist can do is make the coaches better coaches," Foster said. "If I can give an athlete a better coach, then I've done my job."

Working with a colleague from the Netherlands, Foster received a research grant from the International Olympic Committee to perform studies at the 2002 Winter Olympics. He also served as chair of U.S. Speed Skating's Committee on Sports Medicine/Sports Science/Drug Testing for more than 10 years.

Foster said the years he has spent working with professional speed skaters were "pure joy."

"You take people like Bonnie Blair or Dan Jansen or Shani Davis, you know any of the elite skaters, those people are complete geniuses at what they do," Foster said. "The ability to work with somebody who is a genius, that's really satisfying."

Since 2010, Foster said he’s been less involved in the sport. But he said many of the things he learned while studying skaters can be applied to clinical patients, whether it’s helping people with cardiovascular disease work on pacing themselves or helping those with vascular diseases improve blood flow to the legs.

"For me, the stuff that started out as just pure hobby research with a bunch of really neat athletes, most of who are pretty nice people on top of that, you can see the relationship that happens at the other end of the continuum with the patients, who are the people who I really want to get better," Foster said. "At the end of the day, if your father can play with your children, his grandchildren, that’s a lot more important than somebody winning a gold medal."

This year’s ceremony for the U.S. Speed Skating Hall of Fame was canceled due to COVID-19, but Foster said the group hopes to award the honor next spring.