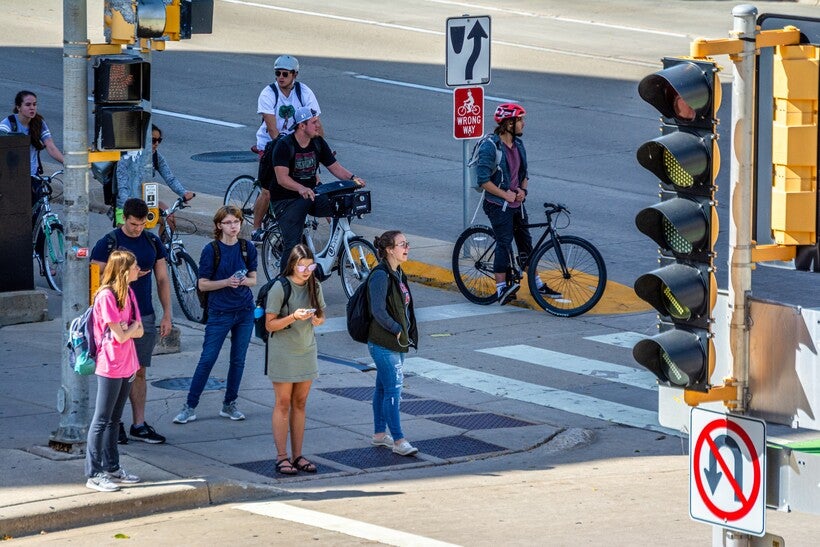 In this 2019 file photo, students along University Avenue wait to cross Park Street on the University of Wisconsin-Madison campus. Bill Martens/WPR

UW Board Of Regents President 'Couldn't Be Happier' With Fall Semester

At the end of one of the most tumultuous semesters in the history of the University of Wisconsin System, Board of Regents President Drew Petersen says he "couldn't be happier" with the performance of the system's colleges amid the ongoing COVID-19 pandemic.

During a year-end interview with WPR, Petersen said the system faced challenges shortly after most UW campuses welcomed students in September for a mix of in-person and online classes. He said one of the early issues faced by the UW was a state law that doesn't allow the UW to begin classes earlier than Sept. 1.

"I think that was sort of coupled with the intersection of the UW System beginning our rigorous testing, and that created a confluence of obstacles to combat and overcome," said Petersen.

When initial COVID-19 testing began at UW campuses, positive rates at some of them jumped well above 10 percent. Outbreaks were reported in student dormitories and at some large fraternities and sororities around UW-Madison. That lead UW System campuses in Madison, La Crosse and River Falls to quarantine dorms and pause in-person classes for two weeks.

After the initial spikes, UW System testing data showed COVID-19 positive rates on campuses decreased and remained lower than those in surrounding communities, though test data isn't directly comparable because UW System campuses use a mixture of rapid, antigen tests and more accurate PCR tests while state and local health officials only use PCR testing to compile their results.

This fall, UW System interim President Tommy Thompson teamed up with the Centers for Disease Control and Prevention and U.S. Department of Health and Human Services to begin rapid antigen testing of community members on UW campuses.

"And it's because of system President Thompson's reputation and relationships that we've got this partnership, we're the only system of higher education in the country that's providing this kind of testing," said Petersen. "And it's absolutely astonishing to me."

Petersen said the UW System is now in talks with federal officials about having UW campuses act as vaccine distribution hubs.

"We have the physical assets to deliver it," said Petersen. "We've got talent in those areas. We can supplement it with federal resources. And we've got that demonstrated record of success such that if you're looking for the right distribution partner, I think it's tough to argue that the UW system is not that."

Petersen said he is grateful to have Thompson leading the UW System on an interim basis, but Thompson's tenure is a product of a failed search for a new president this summer.

In late 2019, former UW System President Ray Cross announced he would retire and would step down as leader once the UW Board of Regents hired a replacement. In June, a search committee made up mostly of regents and former regents announced a single finalist, former University of Alaska System President Jim Johnsen. This drew heavy criticism from some faculty members at UW campuses who said they had far less input on the search process than in previous searchers for UW leaders. On June 12, Johnsen announced that he was withdrawing as the sole finalist for the top UW job. Not long after that announcement, Johnsen resigned from his position as head of Alaska's university system.

Although he feels putting a single candidate forward as the finalist for the UW president search was one of the things that led to it failing, Petersen said he'd do it again.

"And the reason is because we weren't putting someone else forward that didn't have a reasonable shot at getting that job, and particularly during a pandemic that felt like the wrong thing to do," said Petersen.