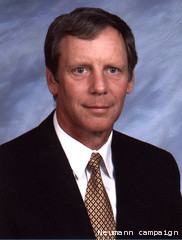 Frequent G-O-P candidate Mark Neumann hopes to come from behind in the polls and win the Republican Senate nomination next Tuesday.

In the mid 1990's, Mark Neumann kept at it and on his third try,  won a house seat in southeastern Wisconsin. But Neumann angered some GOP leaders and got tired of the lack of clout in the lower chamber. So by 1998, he took on incumbent Democratic Senator Russ Feingold. It was a contentious race, memorable for a televised debate where Neumann questioned whether a young female audience member who quizzed him  about a campaign contribution was a plant from the democrats. He later apologized to the woman.

Neumann lost the senate race and then devoted the next decade or so to his businesses, including starting a Milwaukee voucher school and building homes.  Two years ago, he again got the political itch and opposed Scott Walker in what at times was a heated Republican primary for governor. Neumann even campaigned outside Walker's county executive office in Milwaukee  to highlight that county spending went up under Walker.

"I am the fiscal conservative in this race. I support smaller government...less spending," Neumann said at the time.

After losing to walker,  Neumann returned to the world of business. but now he's running for senate again with much of his campaign focused on a promise to reduce the federal deficit and cut pork-barrel spending. A few months ago, Neumann criticized pork by bringing a pig named "Mister Favors" to the Milwaukee Press Club.

Neumann supporter Deb O'keefe appeared thrilled to meet the candidate. She says Neumann understands that government needs to be run more like a business, and is a true conservative.

But, a man who spoke with Neumann, Gavin McNeil, says he may not be able to bring himself to vote for the wealthy business executive  because of the 2010 governor's primary.

There are plenty of undecided folks in the GOP senate race, perhaps as much as 20-percent of Republican voters. Voter Greg Moral says he'll make up his mind after reading more about the contest while trying to ignore television advertising.

Plenty of pro-Neumann ads have been on the airwaves, from ones paid for by the candidate to many funded by the national conservative group, Club for Growth.  A busload of Tea Party members also campaigned for Neumann in Wisconsin this week, in hopes his current political bid  will be his most successful.