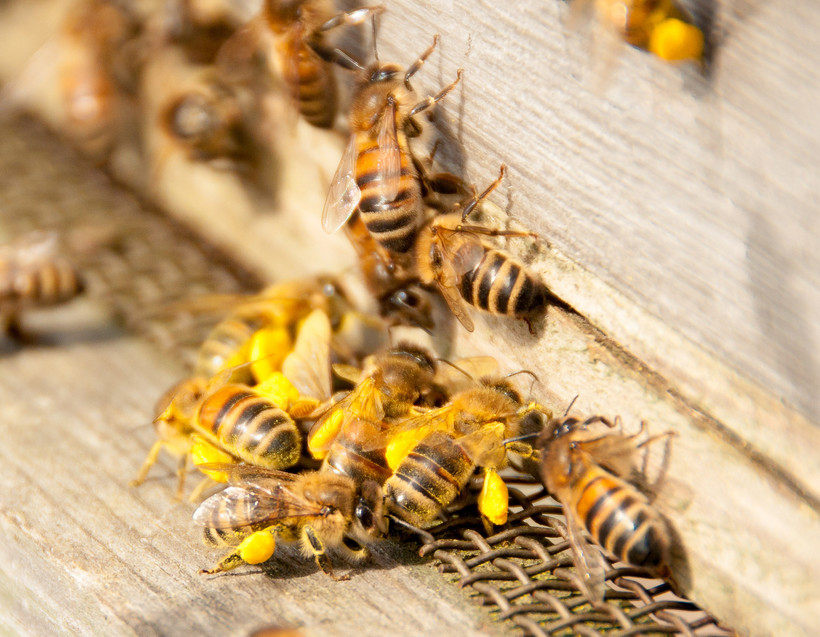 US Honeybee Colony Numbers Are Up, But Researchers Say Numbers Might Not Reveal Health

Honeybee colonies -- specifically for operations with five or more colonies in the U.S. -- were up in April 2017 compared to the previous year, according to a U.S. Department of Agriculture honeybee health survey released this week.

While it's always good news for the colony population to be on the rise, it might not be the best estimate of honeybee health, according to Nathalie Steinhauer, graduate student at the University of Maryland's Department of Entomology and the Loss and Management Survey coordinator for the Bee Informed Partnership, a nonprofit that works with beekeepers to keep healthier bees. She said that if looking at one year to another, there will be fluctuation.

"Overall, over the last 20 years ... the population has been pretty stable so you know, looking just one year at a time doesn't give a good picture and the reason is because even though we're still ... expecting a lot of losses of colonies, the beekeepers can compensate for their loss, so they respond to high-loss rate by a high production rate by putting new colonies in their apiary, (by) splitting colonies or buying colonies from other producers, and basically we have a quick turnover of colonies," Steinhauer said. "This is really what concerned us more than the population size and the number of colonies on its own."

Steinhauer said usually, beekeepers add more colonies to make up for their losses because they have to fill a pollination contract and have to have a specific size apiary at a certain time of year. On top of that, they know to expect losses over the winter  and need to go into fall with a higher number of colonies, so they split colonies more actively.

"Not only does that come with a lot of cost for the beekeepers themself, it actually might accentuate the stress on the colonies, so all in all, number of colonies, is probably not a big enough picture," Steinhauer said.

Meanwhile, the Wisconsin Ag Statistic Service reported this week that honeybee colonies in Wisconsin totaled 18,000 on April 1, a 3-percent drop from last year.

Steinhauer said in general, the causes of mortality in colonies are diverse and there are many factors that affect colony health. Mostly, those are pests and pathogens, poor nutrition and pesticides. Enemy no. 1, though are Varroa mites.

"We know that Varroa has been detected in over 90 percent of the colonies throughout the country so if a colony doesn't have mites now, we know that they're going to have mites in a coming few months," Steinhauer added. "It's actually a very prevalent parasite ... it also transmits viruses."

As for what this mite does, picture a human infant with a parasite the size of a diner play sucking on it, Steinhauer said. However, replace the human with bee. The mite feeds on both adults and the larvae.

According to the USDA's survey, Varroa mites were stressor no. 1 for operations with five or more colonies during all quarters of 2016.

The USDA's honeybee health survey also showed that honeybee colonies that were lost with Colony Collapse Disorder symptoms -- again, on operations with five or more colonies -- was at 84.4 thousand colonies from January through March 2017. That's down 27 percent from the same quarter the previous year.

Colony Collapse Disorder was first reported in 2006-2007 and includes a very specific set of symptoms that includes rapid loss of the adult honeybee population despite the presence of the queen, capped brood and food and absence or delayed robbing of food reserves, Steinhauer said. She noted that it acted as an epidemic.

"It was very intense for … the first year, and it was, you know, devastating for the beekeeping industry," Steinhauer said, adding that big commercial operations lost 80 to 100 percent of their colonies and that it acted fact. "Usually, bee experts refer to CCD as probably the worst and the best thing that happened to bees because yes, it was devastating, but it also raised awareness and you know it put bees in the picture. People started to care about what was happening to bees, realized how dependent we are on bees and their work, and so that definitely raised awareness."

Honey bees pollinate an estimated $15 billion of crops each year, ranging from almonds to zucchinis, according to a 2016 release from the USDA about its first ever Honeybee Colony Loss survey.

Steinhauer said while there’s still research being done, a specific cause for Colony Collapse Disorder that would explain the difference between the colonies that were affected by it and those that haven't been found.

"The best explanation that we might have is that it's a collusion of factors and probably some aspects of viruses and others might have worked together," Steinhauer said. "The thing to know is that it really acted like a whistleblower."

Steinhauer said that there aren't that many cases seen anymore. Most cases are self-reported, too, so it’s difficult to be specific about whether the reported cases have the full list of symptoms. She added that all symptoms have to be present for a loss to be identified as CCD.

"Most of the cases of colony mortality that we see today are not CCD, so we have a high level of causes of loss, but it's not due to CCD anymore, so it's definitely not one of the major drivers of, at least in the last five years for sure,: Steinhauer said.