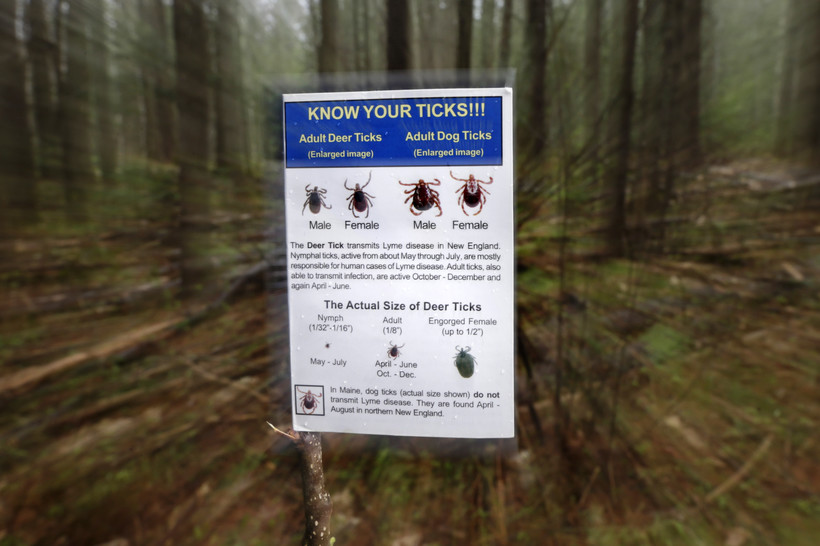 In this photo made Friday, May 9, 2014, an informational card about ticks distributed by the Maine Medical Center Research Institute is seen in the woods in Freeport, Maine. Robert F. Bukaty/AP Photo

US Health Officials Expecting An Explosion Of Lyme Disease Cases

Warmer weather in Wisconsin doesn’t just bring flowers and sunshine. A new prediction stresses Lyme disease outbreaks are expected to be widespread this year and next.

Dr. Amesh Adalja, an infectious disease physician, said this major outbreak is no surprise since the reach of the tick that spreads Lyme disease has increased from the eastern seaboard all the way into the Midwest.

Currently, an estimated 300,000 people contract Lyme disease in the United States each year, and 96 percent of cases come from 14 states, with Wisconsin being a hotspot, according to the Center for Disease Control and Prevention.

Lyme disease is an infectious illness first discovered in the U.S. in the 1970s. Adalja said it’s an infection that’s transmitted through the bite of the deer tick.

"We’ve seen that this tick also feeds on other animals, particularly mice and rodents, and we've seen explosions in those populations which usually is a harbinger for a bad Lyme year," Adalja said.

However, he said the disease is not transmitted instantaneously, it takes more than 24 hours for the bacteria to make its way from the tick into the blood. Once the bacteria is transmitted, the stages of Lyme disease will begin.

"It goes through several different stages; and in the very beginning, you may or may not have a bull's-eye rash, which is a very characteristic rash of Lyme disease," he said. "After that, the bacteria can move to different parts of your body including your joints, your brain, and your heart and can cause a wide variety of symptoms and in certain cases it can also cause late stage symptoms which has bad arthritis or chronic brain infection."

Adalja, who is also a senior associate at Johns Hopkins Center for Health Security, said the awareness of Lyme disease is very high as doctors have become much more acumen to the risk of it and are testing for it.

"Sometimes, probably in settings where people shouldn’t be tested for Lyme disease, they are being tested," he said. "That increased testing is picking up a lot of cases."

Although Lyme disease cases have tripled in the last 20 years, Adalja said there is one good thing about it.

"The good thing about Lyme disease, although its cases are exploding, is that it's treatable in all of its stages by standard courses of antibiotics, and that’s really been how we controlled Lyme disease in the beginning —is getting people diagnosed and putting them on the appropriate antibiotic therapy."

He said while LYMERix was the first and only FDA approved vaccine against Lyme disease, the company withdrew it from the market due to lack of purchase.

Adalja said the disease surveillance have improved since then and the true burden of Lyme disease is clear as it has become a top infectious disease concern of the general public.

Conversely, Adalja said it will probably be years before there's another Lyme disease vaccine in the U.S.

In the meantime, here are a few tips Adalja recommends to limit your risk of getting Lyme disease: