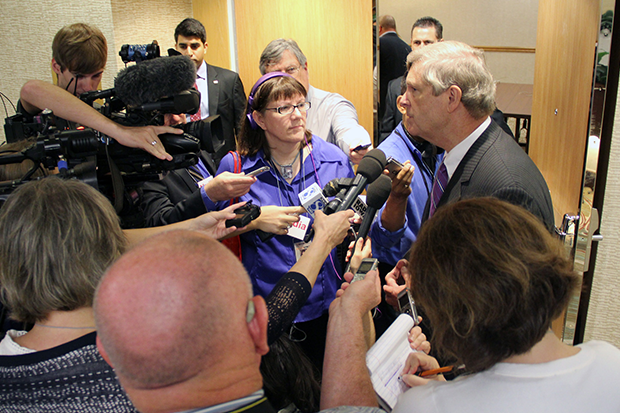 Understanding The 2015 Wisconsin Avian Flu Epidemic: Preparing For The Future

What Are Government Regulators, Poultry Industry Doing To Reduce Prospect Or Severity Of A Future Avian Influenza Epidemic?
By Scott Gordon and Kristian Knutsen
Share:

While many in the poultry industry have defended their existing biosecurity practices in the wake of the epidemic, many also say it has highlighted some crucial weaknesses. Most of them have to do with the opportunities humans unwittingly create for the virus to spread from farm to farm.

"We as an industry did unfortunately a very good job of spreading it around ourselves to industry partners," John Brunnquell, CEO of Indiana-based free-range and organic egg company Egg Innovations, told Wisconsin Public Radio's "Central Time" in June. "We were not on the top of our game biosecurity-wise early in the infection stage."

For instance, Brunnquell said he wasn't aware of how many visitors, like sales representatives, are visiting farms and possibly carrying out the virus on their shoes or clothes. Brunnquell also said that his company planned to step up its measures for more predictable comings-and-goings on its farms, especially those by workers and vehicles, and to have workers wear single-use disposable garments and sanitize cars and trucks between visits. He said his company's biosecurity protocols will never subside to pre-outbreak levels.

Brunnquell also predicted that the outbreak would spark a new discussion about how concentrated livestock operations should be.

U.S. Department of Agriculture Secretary Tom Vilsack has said his agency is preparing for a possible fall recurrence of avian influenza  by adding 3,200 employees to its Animal and Plant Health Inspection Service (APHIS). During the spring and summer outbreak, farmers, industry groups and lawmakers criticized the USDA's response to the crisis, saying that it was too slow and confusing.

In July, John Clifford, USDA chief veterinary officer, told the U.S. Senate Agriculture Committee that the agency would change some of the finer points in its communication and coordination with farmers, including assigning dedicated federal liaisons to each farmer affected by the outbreak rather than rotating out liaisons every few weeks.

On Sept. 18, the USDA issued a response plan for a possible fall return of the epidemic. It sets new goals for more quickly responding to infections and streamlines the processes involved in handling animal emergencies, including indemnity payments to farmers for lost animals and equipment. One of the more controversial aspects of this plan allows farmers, on a case-by-case basis, to depopulate flocks with a method known as ventilation shutdown, in which a poultry barn's air circulation systems are shut off and the birds inside die of heat stress.

Poultry industry observers point to concerns over an autumn return of the epidemic, or its spread to migratory wild birds in the Atlantic Flyway, which corresponds with major chicken raising regions in the southeastern U.S. In Minnesota, that state's Department of Natural Resources continues to search for the virus in wild bird populations and is bolstering its depopulation resources, while turkey growers are building upon their biosecurity practices.

Later in July, the USDA reported that it had successfully tested an avian flu vaccine on chickens and would proceed to test it on turkeys. But as the Des Moines Register reported in August, this vaccine is based upon the H5N2 variant that struck in this recent outbreak, and may not work if the virus mutates into a new strain. Meanwhile, researchers in the U.K. developed a genetically modified chicken that still dies from the virus, but does not pass it on to other birds.