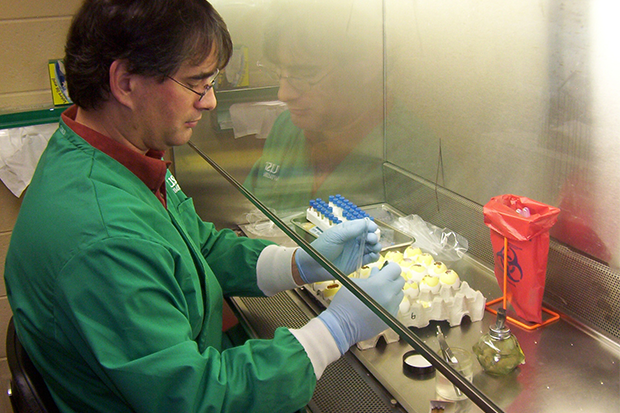 A scientist in the U.S. Geological Survey's National Wildlife Health Center lab in Madison conducts tests on eggs inoculated against avian influenza in 2007.

A standard protocol of biosecurity practices is recommended for poultry growing operations, from small backyard flocks to those that raise tens or hundreds of thousands of birds. These precautions are intended to prevent and limit the spread of the avian influenza virus. They are also targeted to address potential transmission of the disease between wild and domesticated birds, as well as its spread among poultry flocks.

Multiple state and federal agencies take responsibility for tracking and coordinating the response to an outbreak of avian influenza among both wild birds and domestic poultry. At the national level, the Animal and Plant Health Inspection Service (APHIS) of the U.S. Department of Agriculture (USDA) promotes biosecurity practices to prevent avian influenza from becoming an established, endemic disease among poultry and therefore safeguards this sector of the food industry.

As part of its Disease Preparedness Response Plan, its work includes monitoring highly pathogenic avian influenza in wild waterfowl, providing resources for the poultry industry to establish effective biosecurity practices, and coordinating with state officials and the poultry industry when responding to the disease. The National Wildlife Health Center (NWHC) with the U.S. Geological Survey (USGS) also monitors the disease, while the Public Health Division of the Armed Forces Health Surveillance Center also conducts tracking. Additionally, the U.S. Environmental Protection Agency provides information about antimicrobial disinfectants that are asserted by manufacturers to be effective with influenza viruses and are used by the poultry industry.

The U.S. Centers for Disease Control and Prevention provides recommendations for workers exposed to avian influenza through its National Institute for Occupational Safety and Health. These jobs include wildlife biologists and laboratory workers, employees in the poultry industry at meat farms, egg layer farms, hatcheries, processing plants, and live markets, as well as government and private workers involved in disease control and eradication. The Occupational Safety and Health Administration (OSHA) within the U.S. Department of Labor also provides guidelines to companies and workers on how to protect themselves from avian flu transmission, though these are largely geared towards virus subtypes that can infect humans (primarily H5N1).

Similarly, other federal agencies have developed resources and protocols for addressing avian influenza varieties that humans can contract and spread.

At the state level, the Division of Animal Health within the Wisconsin Department of Agriculture, Trade and Consumer Protection (DATCP) is responsible for responding to outbreaks of avian influenza among domestic poultry. DATCP has broad authority to issue restrictions on the movement of poultry, including the delivery of new chicks from hatcheries. The state veterinarian, who works with the agency, has the authority to ban the transportation of poultry in counties where the disease has been identified, including markets, fairs and other public settings. Flocks that are part of or affiliated with the National Poultry Improvement Plan (NPIP), which was developed to monitor for mulltiple diseases found among domesticated birds, may also be restricted in movement. DATCP also oversees a mandatory premises registration system for domestic livestock (excepting those owners claiming a religious exemption), which covers poultry operations of all sizes (including even small backyard flocks), and is administered in a partnership through the non-profit Wisconsin Livestock Identification Consortium. Perhaps most visibly, DATCP is responsible for overseeing the protocols to limit the spread of the virus by depopulating infected flocks and disposing of the birds' remains.

At the university level, the Wisconsin Veterinary Diagnostic Laboratory at the University of Wisconsin-Madison works to test individual birds for the presence of the avian influenza virus. Test subjects include poultry that is prepared for movement or sale, and flocks being surveilled through NPIP requirements. It also provides a testing kit for owners of backyard flocks and game birds.

Meanwhile, the Wisconsin Department of Natural Resources (DNR) monitors diseases found in wild birds, including avian influenza. The agency investigates the deaths of five or more birds in a single location, and collaborates with the NWHC on surveillance efforts. The DNR also worked with the USDA on its H5N1 surveillance programs to test more than 6,000 wild birds for exposure to avian influenza between 2006 and 2010; no viruses of that type were detected then.

What practices are recomennded for tracking and preventing avian influenza in domesticated birds?