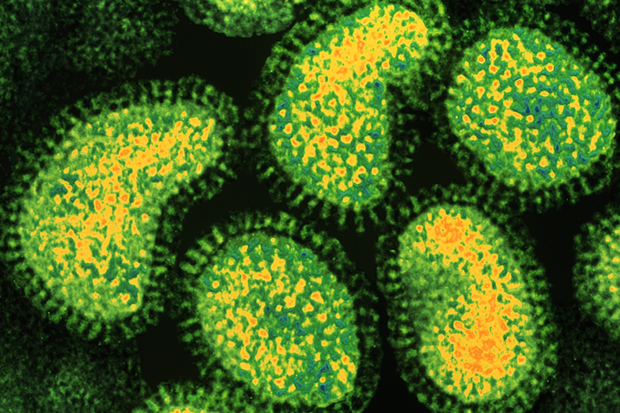 Influenza A viruses under a transmission electron microscope.

Influenza is an infectious disease that can be transmitted between and among numerous species of animals, including humans and other mammals, and wild and domesticated birds. It is caused by an RNA virus of the same name. Multiple types cause seasonal and epidemic infections of varying levels of severity among host animals. As the virus is based on RNA, it has a relatively high rate of mutation and can therefore be difficult to isolate and treat.

The influenza virus is grouped into three general categories: A, B and C. The Type A virus infects birds, as well as humans and some other mammals. Type B is limited to primarily humans, while Type C is found among both humans and swine. Wild birds and domestic poultry flocks are susceptible to Type A, which can be divided into low pathogenic avian influenza (LPAI) and highly pathogenic avian influenza (HPAI), with the latter being very contagious and capable of killing large numbers of animals.

Type A influenza viruses, including those that infect birds, are characterized by two types of proteins on their surfaces: hemagglutinin (HA) and neuraminidase (NA). Together they're integral to the process by which a virus particle targets, infects and spreads through its host's cells. There are 16 variants of HA and 9 of NA, with the specific combination determining the subtype of influenza. Animals that can be infected by influenza have different levels of susceptibility to each subtype. More than 10 subtypes have been known to infect humans.

The most pathogenic subtype of avian influenza is H5N1, which emerged in southeast Asia and is found among many species of wild birds and can also infect domestic poultry. Humans are susceptible to H5N1, a variant of which was first observed in Hong Kong in 1997 and has subsequently infected hundreds of people, mostly in Asia and Africa. These outbreaks have also instigated the culling of hundreds of millions of poultry birds in affected regions. There is also a low pathogenic variant of H5N1 that infects wild and domestic birds, and has mostly been observed on a sporadic basis in North America.

H5N2 is the avian influenza virus subtype that is responsible for the 2015 outbreak in the United States. It is distinct due to the presence of a different neuraminidase protein, which affects its pathogenicity within and between different bird and mammal species. Both low and highly pathogenic varieties of H5N2 have been observed for decades, and they have infected wild birds and multiple species of domesticated poultry, including chickens, turkeys, pheasants, quail, ducks, geese and ostriches. The specific strain of highly pathogenic H5N2 responsible for the epidemic is reported to have originated with H5N8, when this variant from Asia mixed with H5 viruses was found in North American wild birds.

As assessed by public health monitors, the risk posed to humans by H5N2 is very low. Humans can catch the virus if they are in close contact with infected birds, but the illness that follows is very rare and mild if acquired. Moreover, transmission of H5N2 from human to human has not been observed.

It is safe to eat poultry products that are appropriately handled and cooked, in order to avoid the transmission of multiple pathogens that do infect humans. Meat should be heated to a temperature of 165 °F, and both the white and yolk portions of eggs should be cooked until solid. Proper poultry handling practices include washing hands before and after working with meat, and using separate cutlery and preparation surfaces while cooking.