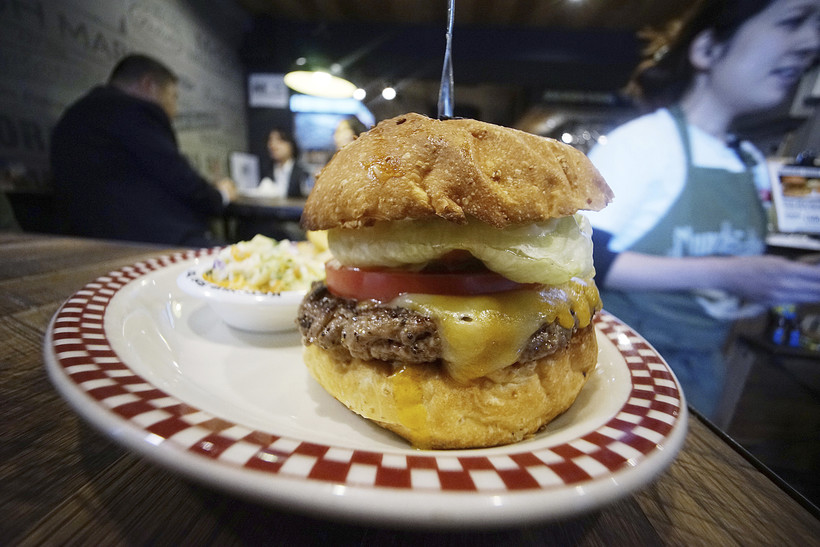 Umami: The Flavor You Might Not Know, But Probably Love

'Fifth Flavor' Is One Of The Most Craveable
By Gretchen Brown
Share:

Even if you’ve never heard of umami, you know the taste: it’s savory and permanent, present in some of America’s favorite foods, like burgers and pizza.

"Most people think it’s a theory or a sort of conceptual thing, but it’s really an actual taste comprised of glutamates, which are amino acids," says restaurateur Adam Fleischman. "And they create a savory sensation in the palette, and the center of the tongue detects it and it’s probably one of the most craveable tastes, along with sweet, obviously, and salty for some people."

Fleischman is a known master of the "fifth flavor," as owner of the restaurant Umami Burger. It became his niche about a decade ago when he realized he couldn’t get enough of umami.

"What I was really craving in a dish was the umami, and the dishes I liked the most had all this flavor in it," he said. "So I decided to come at cooking from the angle, and perspective, of umami rather than a set type of cuisine."

That’s because although umami is found in popular American foods, it’s not limited to them. On the contrary, umami is found across cultures, even in ancient Roman and medieval Arab cuisine.

The term itself was coined by Japanese chemist Kikunae Ikeda in 1909 to describe his soup stock.

You can find umami taste in Asian food through fish sauce or soy sauce, Italian food through tomatoes or dried mushrooms, or French food through veal stock and marmite. Even MSG, the flavoring found in your instant ramen seasoning packet, is a synthetic type of umami.

"It’s a feeling on the tongue that kind of creates a lasting permanence which is what makes us crave it," Fleischman said. "As opposed to certain flavors that you taste them and they dissipate quickly."

Because there are so many ways to get the Umami flavor, trying new combinations can sometimes be a leap of faith. Fleishman started out visiting Japanese supermarkets and buying ingredients.

Over time, he figured out what works, and what doesn’t. In a new cookbook, Fleishman is sharing what worked: those "Flavor Bombs" of taste.

For instance, his famous Umami Burger is still a burger, but it’s quite untraditional, topped with a pile of umami ingredients including parmesan cheese, shiitake mushrooms, roasted tomatoes and kombu seaweed.

He also includes a recipe for "The Piglet," a dark chocolate dessert with dried porcini mushrooms hidden in the graham cracker crust.

He says dark chocolate is sort of an "honorary" umami taste, because it mimics the pleasure you get from umami.

"I was not expecting it to taste very good, and it ended up being probably my favorite recipe in the book," Fleishman said. "It doesn’t taste mushroomy, it tastes sort of earthy and chocolatey."

His kids even approved.

Afghanistan School Attack: Death Toll Rises, As Do Fears Over Sending Girls To School
There Have Been, On Average, 10 Mass Shootings In The U.S. Each Week This Year
Why People Are Fleeing Honduras For The U.S.: 'All That's Left Here Is Misery'
'Underground Railroad' Director Barry Jenkins Sees Film As An 'Empathy Machine'
Cats Take 'If I Fits I Sits' Seriously, Even If The Space Is Just An Illusion