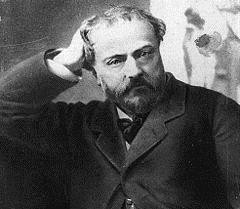 Even during his career as a civil servant in the French Ministry of the Interior, Emmanuel Chabrier was never far from thoughts of music. He wrote piano pieces and entertained his friends with playing so wild that he reminded one witness of an enraged bull.

And yet there was a deeply serious side to Chabrier that became apparent in 1880 when he attended a Wagner opera at Bayreuth. Composer Henri Duparc recalled:

You can scarcely imagine how much it meant to him to be hearing Tristan, which he didn’t know then, and was almost afraid to get to know, as if some inner voice was warning that it was going to transform his entire life. There had been some excellent performances in Munich, and I had gone to hear the first; it was on a Sunday, and I was so excited that I went back to Paris to persuade a few friends to come for the second performance the next Sunday.

One of those friends was Chabrier, whom I went to see at the Ministry. He hesitated for quite a while, and raised a lot of objections; but apparently I was able to convince him, and at last he promised to come along with us.

Everyone was delighted, because that meant that the journey would be entertaining...He was so overcome by the opera that, although he was usually so gay and chipper, he left us after the performance and shut himself up in his room. You know, until then he didn’t intend to devote himself entirely to music; Tristan made him realize his true vocation, and by the time he returned from Munich he had made his decision.

Although Wagner inspired Chabrier to quit his civil service job and devote himself to music, Chabrier soon joined a growing line of French composers determined to break away from Wagner’s influence and write music that was inherently Gallic.