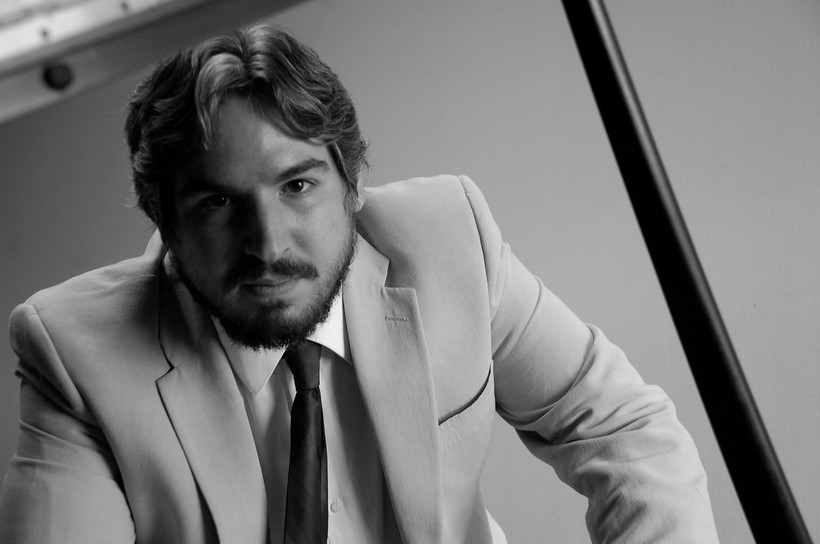 As a native of Turkey, composer, pianist and conductor Erberk Eryilmaz  has a somewhat unique perspective about classical music outside of Europe.

Eryilmaz was born in Samsun, Turkey in 1989. He started his music education when he was 3 years old and has studied at the Samsun Conservatory, Hacettepe University - Ankara State Conservatory and at the Hartt School. He is currently pursuing his artist diploma in composition at Carnegie Mellon University.

WPR's Norman Gilliland recently heard a performance of his colorful "Miniatures Set No. 4" on KING Radio, a classical music station in Seattle, and asked the composer to talk more about his knowledge and experiences:

Norman Gilliland: There’s a long, though not very well known tradition of classical music in Turkey. What are some of its characteristics and what does your music take from them?

Eryilmaz: Yes, music of Turkey has a very big history, and both written and unwritten (folk music) are very complex. The philosophy of music making is very different from the Western culture, and naturally that difference is seen in the theory of the region's music. The biggest difference is that Turkish music is not tonal. It uses the Makam system which is a modal system with many principles. One other exciting element of Turkish music is the irregular meters. That makes Turkish music very unpredictable and exciting.

NG: Where do your ideas come from?

NG: Is there an ideal venue for performing your music?

Eryilmaz:  I think small concert halls are the most ideal. I like to have a personal connection with the audience. If I am conducting or performing, when I turn to the audience, I love being able to look at people's eyes. In the end, music is just a way (of) communication. If the audience is distant and in the dark, how could I have that connection? That is one of the reasons why most of my music is for small ensembles rather than orchestra. If people are playing my music, I would like to know their names, know who they are. Performers should own my music as much as I own it and we should feel like a team communicating with the audience. That's when I get the most excited and that's when I believe that music can be exciting. The tradition in Turkish music is also very similar to this.

Perhaps, the most emotional, most exciting musical experiences would happen in people's living rooms. I wish there would be more living room music in the western cultures, just like the Romantic era, but I guess capitalism would prefer to have large concert halls to sell more tickets.

NG:   What sort of instrumentation do we hear in "Miniatures"?

Eryilmaz:  "Miniatures Set No.4" can be played either by a string quartet, or a string ensemble. Although it is for western string instruments, throughout the piece, the instruments imitate instruments of the region such as Black Sea(folk) kemençe, classical kemençe (which is often used in Ottoman music), and folk violin playing of Bolu (a town in the northern Turkey).

NG: Has living and working in North America affected your music?

Eryilmaz: Yes, absolutely. First of all, I should say I love living in the States. I spent almost 10 years of my life here, but living here makes me miss Turkey and the music there so much! That motivates me to learn and discover the music of the region. So many of my composer friends in Turkey are not that interested in the music of Turkey as much as I am, and naturally, there is no influence of Turkish music in their own music, but for me, listening to the music of the region is a free flight ticket to Turkey, and if you see me watching folk dancing of Turkey, you can know that I am there.

NG: How closely do you work with the performers of your music?

Eryilmaz: As I mentioned earlier, I believe that if a performer is playing my music, they should own the music as much as I own it. I am always very flexible with what I write. I would like my music to be personal to the performer. You know, when you hear the masters, for example Horowitz and Rubinstein playing Chopin's "Mazurkas," even if they are playing the same exact mazurka, you may question if they are actually playing the same exact "Mazurka." Their performances are so unique to them. I would hope to achieve a similar experience with the performers of my music.

I follow a few steps while I am writing: first of all, I write whatever comes out; most of the time, I try to keep it as simple as possible. Later, I work for weeks/months to make it unpredictable. I believe unpredictability creates excitement and keeps the listeners awake. Lastly, I work on it with the performer(s).

NG:  Do you write from inspiration or wait for a commission?

Eryilmaz: I always wait for a commission. I always write for specific people, otherwise I cannot motivate myself, I cannot get inspired. I need to be able to imagine the piece getting performed in my head. The piece I write grows with the personal relationship I have with the musician(s).

NG: You’re a young composer — still in your mid-20s. Does your music seem to attract mostly a young audience?

Eryilmaz: If I become a good composer, I should be able to excite everybody from every age. I can only hope to excite people around my age too, but I think you are asking this, because we don't see young people at classical music concerts. I believe that young people or anybody should never be blamed for not going to concerts. People need to have a personal connection, a type of communication in order to love something. If they love it, you can't stop them from coming to concerts. But, how can we expect them to love anything if they are sitting in the dark at a distance and told "sit tight," "don't cough," "don't clap"?

Presentation is so important. That is why I like to perform my music in smaller halls. When I conduct or play my music, I would like to look at people's eyes and have a sort of communication. Otherwise, why should we do what we do?

Eryilmaz: Before the summer comes, I have a busy next two months. I will soon go to Houston to have my recent work "Thracian Airs of Besime Sultan" premiered by Apollo Chamber Players featuring clarinetist Ismail Lumanovski. In May in Pittsburgh, Hoppa Project, a group formed by my wife, violist Laura Krentzman and I, to promote music from Eastern Europe and the Middle East, will have a series of events featuring Turkish and Australian music to remember the 100 year anniversary of Gelibolu (Gallipoli).

Also, I will get to hear my "Dances of the Yoğurt Maker" performed by two ensembles Alia Musica in Pittsburgh and TURNmusic in Burlington, Vt.

Hear a performance of Eryilmaz's "Dances of a Yogurt Maker."