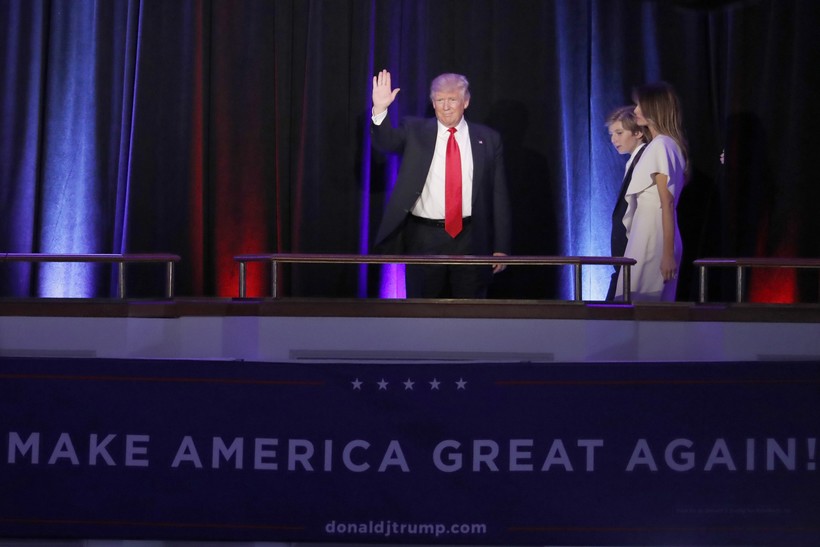 Many Democrats Wondering What They Do Next
By Shawn Johnson
Share:

More than 1.4 million Wisconsin residents voted for Republican Donald Trump. Pete Carew of the village of Sturtevant said he was one of them.

Carew is tired of both parties saying every four years that they're going to change things for the better and doing nothing about it, he said. In the past, he always voted Democrat. Not this year.

"The last eight years I stood behind our president 100 percent," Carew said outside of his polling place Tuesday. "I won't say he failed miserably, but he fell really short. Short enough for me to say, 'Why can't we vote outside the box? Why can't we see something different?'"

Their victories flew in the face of polling and traditional turnout patterns and left many people wondering what just happened and what happens next.

In Racine County where Carew voted, election results suggest other voters had similar changes of heart. President Barack Obama won Racine County in 2008 and 2012. Trump won it handily this year.

It was one of several counties Trump won where Democrats typically perform well in presidential years.

"He did a phenomenal job of channeling the economic insecurities and poor people with an agenda that's actually going to devastate them," said Scot Ross, executive director of the liberal group One Wisconsin Now.

Shawn Pfaff, who worked on the successful 2006 campaign for former Democratic Gov. Jim Doyle, said Trump, Johnson and Gov. Scott Walker have all whittled away at pieces of the traditional Democratic coalition in western Wisconsin.

"Maybe they're not hearing what's going on out there," Pfaff said. "Maybe there's heavier focus on the more urban areas of Milwaukee, Madison and some of the issues that dominate that area."

Professor Katherine Cramer, who directs the University of Wisconsin-Madison's Morgridge Center for Public Service, wrote a book called "The Politics of Resentment: Rural Consciousness in Wisconsin and the Rise of Scott Walker." She said rural voters feel disrespected, misunderstood and cheated.

"Donald Trump really tapped into that," Cramer said. "Because he came along and he said, 'You know you're right. You're not getting your fair share, and you're right to be angry about it, and you are hardworking people, and you do deserve more, and what you think you deserve is actually going to people who aren't as deserving.'"

Cramer spent years talking at length with rural Wisconsin voters, and continued to check in with them this year about their feelings on Trump. Even so, she said she did not see Trump's victory coming.

"I was as surprised as most folks I think," Cramer said.

"There are a lot of other pollsters that are wrong along with us today, but that's not an excuse," Franklin said. "The polling industry systematically failed to capture the strength that Trump showed."

"We didn't see evidence in our last two or three polls that Trump was pulling ahead or that Clinton was falling off dramatically," Franklin said. "In fact, what we saw was surprising stability throughout the polling."

Franklin said pollsters would spend a lot of time analyzing what they can do better next time and whether their samples did not adequately represent some groups of voters who supported Trump.

Unofficial totals from Tuesday show Clinton lost by just 27,257 votes, which has led to a lot of tactical second guessing of her campaign.

It's worth considering whether Clinton's absence from Wisconsin played a role in her loss in the state, Michael Wagner, UW-Madison journalism professor, said. Despite a fundraising edge over Trump, Clinton aired fewer ads in Wisconsin and never visited after the April primary.

"Clearly that may have had the effect of depressing turnout or lowering enthusiasm or making voters feel that the campaign wasn't clued into their interests," Wagner said. "All of those things could have conspired to reduce turnout amongst more natural constituencies of the Democrats in presidential years."

Wisconsin's turnout was lower than it had been in a presidential election for two decades as 66 percent of the voting age population cast ballots. It did not hurt Trump, who received roughly 1,500 votes more than Republican Mitt Romney did in the 2012 presidential election. Clinton, however, received nearly 239,000 fewer votes in Wisconsin than Obama did in 2012.

Some Wisconsin Republicans who used to be critical of Trump were singing his praises after Tuesday's results. That included Wisconsin Assembly Majority Leader Jim Steineke, who was once an outspoken member of the so-called #NeverTrump movement.

In March, Steineke called Trump "morally bankrupt con man." In April, he called Trump "a liberal… and a liar." But Wednesday, Steineke said Trump deserved some credit for helping Republicans grow their majorities in the state Legislature, adding he "absolutely" accepts Trump as the Republican Party leader.

"I think there's no question that President-elect Trump brought a whole group of new people into the process," Steineke said. "He's our president. I'm excited about our prospects moving forward."

This was also Wisconsin's first presidential election with a voter ID requirement. Ross, whose organization continues to challenge the voter ID law in court, was not prepared to say whether it had driven down turnout.

"People are inspired by people to go out and vote," Ross said. "And Democrats need to put up people who are inspiring people."