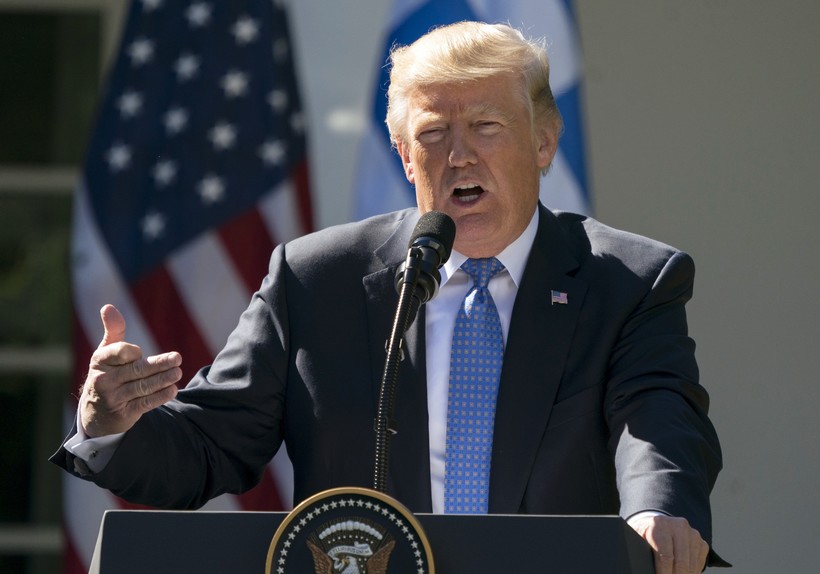 President Donald Trump speaks about his judicial nominees during a news conference in the Rose Garden of the White House in Washington on Oct. 17, 2017. Carolyn Kaster/AP Photo

United States Supreme Court justice nominations get most of the limelight, but the cases that make it to the highest court in the country are few and far between — the court hears, on average, only 80 cases per year out of nearly 8,000 filed.

That’s why Kimi King says Americans should pay more attention to the president’s lower court nominations, like that of the court of appeals and federal district courts

"That’s where all of the action is," King said. "Remember that the district courts set the record. They are the triers of fact. And what they determine, their initial decision, usually winds up being predictive of how the process is going to go through the appellate stage."

King is a professor of political science at the University of North Texas. She said the vast majority of the time the decision at the appeals level is the final decision in a case because advancement to the Supreme Court is so rare.

"It is very easy to argue that the lower courts fly under the radar and then a president will want to stay focused on those lower courts because that’s where the real decision is made," she said.

For example, it was the 7th Circuit U.S. Court of Appeals that ruled in a landmark case last May— not the Supreme Court— that a Kenosha high school bathroom policy violated a transgender student’s rights.

President Donald Trump has 149 federal court vacancies to fill. So far, he has quietly nominated 50 to fill those positions. Eight nominees have been confirmed in the last 10 months.

Just as judges appointed under former President Barack Obama left a liberal imprint on the law, Trump’s nominees lean conservative. King said all are affiliated with the Federalist Society, a legal organization that partners with conservative think tanks and conservative interest groups to pass conservative-leaning litigation.

While the U.S. Courts' website notes "the Constitution sets forth no specific requirements for judges," Congress and the U.S. Department of Justice have their own criteria, which includes an FBI background check, and a rating from the American Bar Association, before a nominee can be confirmed.

Most of Trump’s nominees have been rated "qualified" or "well-qualified" by the American Bar Association, but two were rated "not qualified," most recently Omaha Lawyer Leonard Grasz.

"Grasz is the first nominee since 2006 to receive a unanimous 'not qualified' rating from the ABA," King said. "Of course, President Trump’s administration fired back that the ABA tends to be liberal. There’s some ground for argument there, but as a general rule there has been a tendency to look at what the ADA says and take that into consideration."

King said both "not qualified" ratings were related to the nominees’ roles as political advocates and whether that would tarnish their ability to judge fairly.

Another nominee, John Bush, was confirmed earlier this year, but his nomination spurred debate related to his role as a conservative blogger.

"I think that is also emblematic of the Trump administration trying to put into office candidates that don’t usually fit the typical mold," King said. "Your typical judicial nominee for a district court or a federal court of appeals is someone who has had previous judicial experience or extensive litigation experience. And he has definitely opted for a non-traditional route."