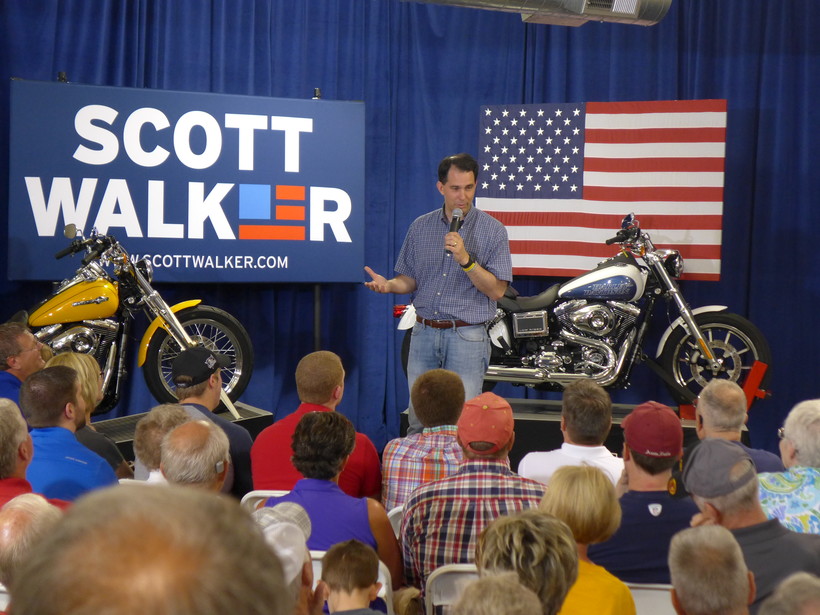 Scott Walker spoke at an Iowa Harley Davidson store on July 18, 2015 during his brief campaign for president. Harleys have been a big part of the governor's political identity. Shawn Johnson/WPR

Trump's comments, and his scheduled visit to Wisconsin later this week, create a potentially awkward situation for Walker, who has built a political brand out of his love for Harley motorcycles.

In a series of tweets that began Monday and resumed Tuesday morning, Trump accused Harley of being "the first to wave the White Flag" in a dispute with other countries over tariffs and trade barriers.

"Harley must know that they won’t be able to sell back into U.S. without paying a big tax!" Trump tweeted Tuesday.

"If they move, watch, it will be the beginning of the end — they surrendered, they quit! The Aura will be gone and they will be taxed like never before!" he added in a later tweet.

A Harley-Davidson should never be built in another country-never! Their employees and customers are already very angry at them. If they move, watch, it will be the beginning of the end - they surrendered, they quit! The Aura will be gone and they will be taxed like never before!

"Governor Walker believes there should be no tariffs or trade barriers as the President stated earlier this month at the G7 summit," Hasenberg said in a statement. "When there's a level playing field, American workers and businesses win."

Wisconsin's other top Republicans took similar approaches Tuesday, criticizing Trump's willingness to impose tariffs on foreign aluminum and steel, but steering clear of commenting on the president's suggestion that Harley-Davidson would be punished for moving jobs overseas.

"We need to hold China accountable for its trade abuses, but that does not need to come at the expense of American workers and businesses," said Republican U.S. Sen. Ron Johnson in a statement Monday. Johnson's office did not respond to a request for comment about Trump's tweets Tuesday.

In an interview Monday with the BBC, Republican U.S. Rep. Jim Sensenbrenner, whose southeast Wisconsin district includes Harley-Davidson, said while he adamantly opposed Trump's decision to raise tariffs, the decision was the president's to make.

"The law allows the president to set tariffs, and the only way Congress can kill the tariffs is to pass a bill which he will veto," Sensenbrenner said. "So I've come to the conclusion that you don't pick a fight with Mr. Trump if you want him to back off because he has a very long memory."

Pressed by the BBC on whether that position was "spineless," Sensenbrenner pushed back.

"It's not spineless at all," Sensenbrenner said. "The fact is if you want him to change his policy, you don't throw a pie in his face."

Sensenbrenner said it remained to be seen whether Harley would actually shift production overseas or whether Trump's positions on trade so far had been part of a long-term negotiating strategy.

Just last week, Walker praised Trump's negotiating position during a luncheon with other governors at the White House.

"The best thing you said at the G7 is the ultimate goal is let's just get rid of all tariffs," Walker told Trump. "You were brilliant to point that out. That's the ultimate answer."

Walker has said international trade policies put some Wisconsin producers at a disadvantage, citing price controls on the dairy industry in Canada.

But Trump's comments on Harley hit especially close to home given Walker's affinity for their motorcycles.

When Walker unofficially kicked of his re-election bid last year, he ran an online ad that showed him riding a Harley-Davidson motorcycle.

He featured the motorcycles prominently during his brief campaign for president in 2015, touring New Hampshire on a Harley and stopping at Harley-Davidson retailers throughout Iowa.

He even referenced his love for the bikes during debates.

"I'm a guy with a wife and two kids and a Harley," Walker said during a presidential debate in August 2015.

When asked with other candidates in a September 2015 debate what their Secret Service nicknames would be, Walker replied: "Harley. I love riding Harleys."

In 2016, Trump ridiculed Walker for his love of Harleys, telling a crowd in Janesville that Walker "doesn't look like a motorcycle guy to me."

Walker will join Trump on Thursday in Wisconsin for the groundbreaking of Wisconsin's Foxconn plant, a project they jointly announced in 2017 and one for which they regularly give each other credit.

Democrats criticized Walker for not doing more to defend Harley against Trump's attacks.

"Donald Trump caused this crisis and career politician Scott Walker is too intimidated to call him out," said One Wisconsin Now Executive Director Scot Ross. "Donald Trump is even publicly insulting Harley, but Scott Walker is so afraid of getting a Trump rage tweet that he won’t even stand up for a Wisconsin business."

An economics professor at the University of Wisconsin-Milwaukee said Tuesday he suspects the company has had plans to move production.

Kundan Kishor said motorcycle companies — not just Harley — have been facing economic headwinds. The company's stock price has fallen 20-percent since the beginning of the year.

Kishor said Asia is Harley-Davidson’s most promising market and that he suspects the company is using the tariffs as an excuse for moving jobs. Besides the U.S., Harley has plants in Thailand, Australia, Brazil and India.

"It takes a long time to decide about all of this, so I'm not sure that the tariff announcement by President Trump (caused the decision) and incidentally the next day or in two weeks they come up with a plant," Kishor said.