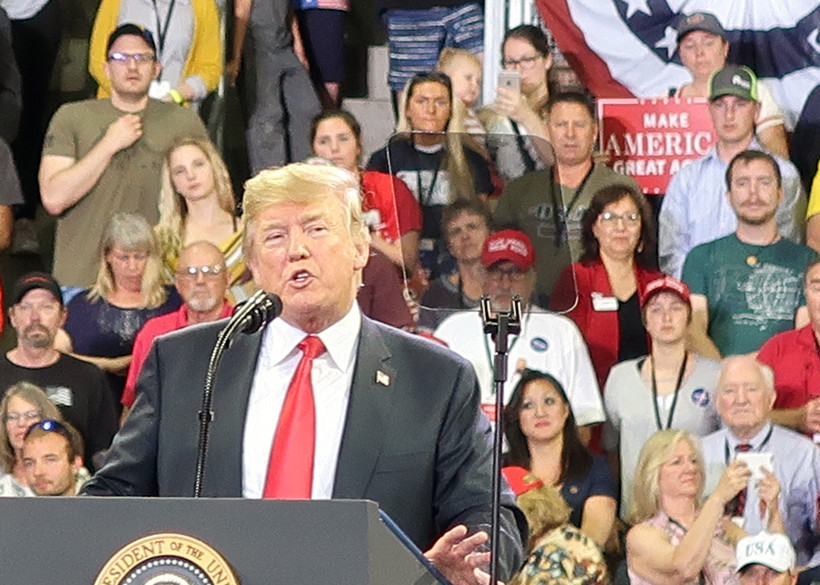 President Donald Trump accused Democrats of an open border policy that costs the nation billions of dollars and allows drugs to pour into the country at a rally Wednesday, June 20, 2018 in Duluth, Minnesota.

Thousands turned out to show their support for President Donald Trump on Wednesday night at a rally in Duluth. The president touted his work on national security, trade, tax cuts and his tough stance on immigration at the Mexican border.

Trump said the United States would now try to keep families crossing the border illegally together, a policy reversal he made just hours earlier by signing an executive. His administration has been under heavy criticism for separating children from their parents at the border.

"We’re going to keep families together, but the border’s going to be just as tough as it’s been," Trump told the crowd at the AMSOIL Arena.

Trump supporter Violet Smith, of Duluth, said she doesn't think families should ever be separated and blamed Congress for inaction on immigration issues.

"My biggest concern with the immigration issue right now is how Congress for over 20 years hasn’t enacted legislation that would really keep families together and that they would allow immigrants to come in and really be a part of America," Smith said.

Trump accused Democrats of an open border policy that costs the nation billions of dollars and allows drugs to pour into the country.

"Democrats put illegal immigrants before they put American citizens," said Trump. "What the hell is going on?"

Trump told the crowd efforts to secure the border were more difficult than they had to be, urging supporters to get out and support Republican candidates. Trump supporter Cliff Kasae, of Duluth, called the controversy over the Trump administration’s strict immigration enforcement a "political hot potato."

Several protesters were escorted from the rally Wednesday evening. Some remained outside the event holding signs, including one that read "Abolish ICE."

Just before the Trump event, people rallied at Duluth City Hall against the president and the separation of families at the border, including Superior resident Naomi Lear.

"It weighs on my heart, and it’s so sad putting yourself in that place and being separated from your own family," she said. "Most people can’t even imagine what that feels like. I think that it’s inhuman and the rules need to change to treat people in a human manner, especially children."

Lori Danz, of northwestern Wisconsin, went to the protest because she doesn’t agree with the president’s policies and the way he treats people.

"I don’t disagree that there is a crisis with immigration in our policy in our country. I think it’s hugely complicated," she said. "I don’t think the answer at all is taking children away from their parents."

Despite contention over immigration, Trump supporters applauded the president’s record on jobs, the economy and national security at the rally. U.S. Rep. Sean Duffy, R-Wisconsin, was among speakers joining Trump at the rally.