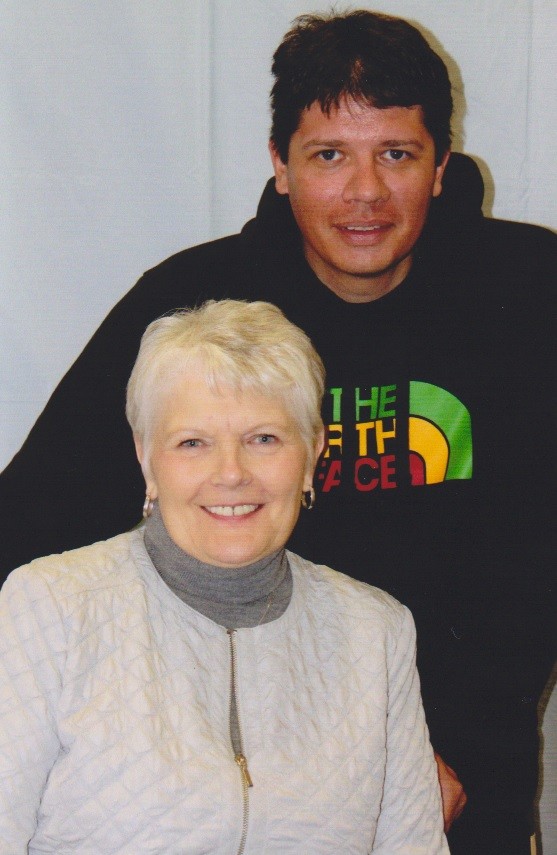 Dianne Hendrickson and her son Eric, a sex offender confined to Sand Ridge Secure Treatment Center, inside the visiting area. The state committed Eric as a sexually violent person in 2002. They believe he has been denied discharge from the facility for rule infractions unrelated to the risk he poses to the community as a sex offender. Dianne Hendrickson is eager to see her son come home: “I have never prayed or wished for anything more than that.” Photo: Courtesy of Dianne Hendrickson

A Convicted Sex Offender Says His Trouble Was Drugs, Not Personality Disorder
By Gilman Halsted
Share:

A change in the risk criteria for convicted sex offenders means more patients at the Sand Ridge Secure Treatment Center will be released. But one offender who's been there for more than a decade says he never should have been put there in the first place. In the third and final part of our series (part 1, part 2), produced in partnership with the Wisconsin Center for Investigative Journalism, Gilman Halsted reports on the case of Eric Hendrickson.

In 1993, when he was 19, Eric Hendrickson sexually assaulted a woman he didn't know. He was high on homemade methadone at the time. He served seven years in prison for the assault and in 2001, the day he was scheduled for release, his mother Dianne learned the state had diagnosed him with a personality disorder and planned to commit him as sexually violent person.

“He was supposed to come home that day,” she said, “and then I got a call saying that the proceeding for commitment was going to take place and he was taken to the Marathon County jail and held.”

He was committed in 2002 and has been at Sand Ridge ever since. His mother says Eric has had drug addiction problems since he was in middle school, but she has never understood how he came to be diagnosed with a personality disorder that makes it likely he would commit another sex crime.

“We saw doctors and counselors and went into outdoor survival programs — we used what ever resources were available — and never through all of that,” she said, “did we ever have any kind of diagnosis of a mental disease or disorder.”

Eric has been in trouble at Sand Ridge for using marijuana. The center does offer Narcotics and Alcoholics Anonymous meetings run by outside organizations, but it has no formal drug abuse treatment program. That's something Eric's mother believes would help him and many other patients at the center who also committed crimes while under the influence.

“To this day I still don't know why they don't have a [drug treatment] program there,” she said. “One needs to be available there so when these people finally have a day of reckoning and finally realize they have a problem, that there's something out there that they go to and grasp and hold on to.”

Sand Ridge administrators say they plan to start a drug abuse program soon, but Sand Ridge Director Deborah McCulloch says many patients at Sand Ridge don't accept their mental health diagnosis and blame their behavior on other things like drugs.

“There are some patients here who will say they are everything but a sex offender,” McCulloch said. “So their problem, according to them, is they need this other kind of treatment. 'If I could only get substance abuse treatment then I would no longer be a risk. I am not a sex offender, I am an addict.'”

Racine attorney Bob Peterson has helped win release for several Sand Ridge patients. He says the criteria for committing someone to the center are sometimes applied too broadly and focus more on the nature of the offender's original crime than on the risk the person will do the same thing again after release from prison.

“It is possible that individuals can be caught up in situations that aren't truly indicative of their risk,” Peterson said. “This is supposed to be about if you have a mental condition at the present time and what your risk is now, and not what you did in the past.”

Eric Hendrickson says he's not a risk any more and is following the rules at Sand Ridge and complying with treatment. His mother says it's time for him to come home.

The staff at Sand Ridge say the law keeping Eric locked up is protecting public safety but it also offers hope to patients and their families. They say if they work on changing themselves, their risk level will go down and a court will eventually release them.

This was the third and final part of our series (part 1, part 2), produced in partnership with the Wisconsin Center for Investigative Journalism.