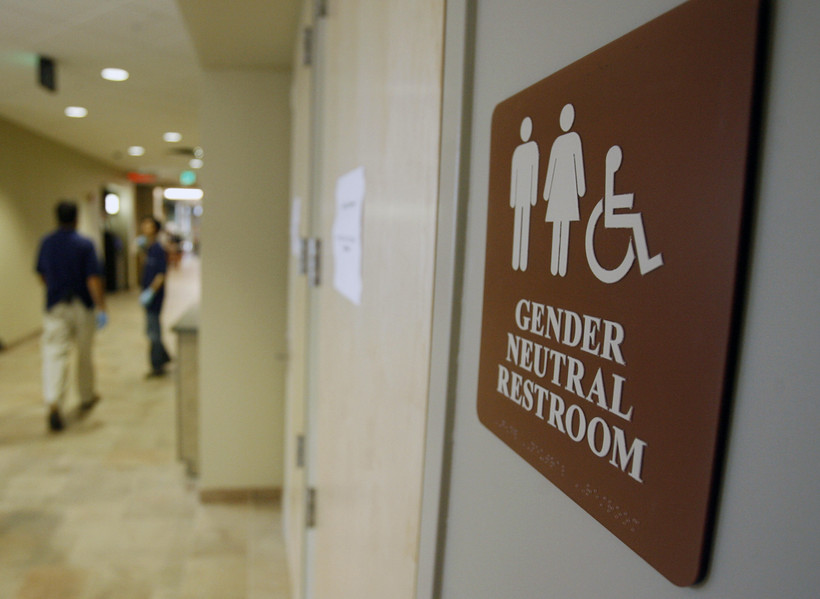 Students Across State Are Coming Out In A Time Of Cultural Transition
By Laurel White
Share:

She kicked one leg over the saddle horn, turned and grinned at her mother. Then, she spun around and faced backward.

“You’re awesome!” crowed onlookers, as "L," a 7-year-old transgender girl from Mount Horeb, Wisconsin, continued her 360-degree pivot in the saddle – called an "around the world" – on her faithful steed, Tully.

L (her full name is omitted here, for privacy) just started taking horseback riding lessons. It’s among a slew of other passions, hobbies and preferences that situate her squarely in the "typical" category for 7-year-old girls: She loves ponies. Pink. Sparkles.

But, of course, coming out as transgender at school earlier this year makes her less-than-typical.

When you ask L why she wanted to start using a new name and wearing dresses instead of boy clothes to first grade, she has a pretty simple answer.

"Because I was transgender," she said, her small voice forceful. "I’m a boy, but I changed to a girl because I like girl stuff and I wanted to be a girl."

L is growing up in a time when transgender rights are one of the most hot-button political issues in the country. And Wisconsin is certainly part of the debate.

During the last legislative session, Kewaskum GOP Rep. Jesse Kremer  introduced a bill banning transgender students from using the bathroom that aligns with their gender identity.

Kremer didn’t respond to an interview request for this story, but in a press release announcing the bill, he said:

"This bill is first and foremost to keep our kids safe. Clarifying the appropriate use of bathroom and locker facilities will ensure that the dignity of all students is respected in these areas where privacy and safety are paramount."

In addition to requiring students to use the bathroom and locker room that corresponds with their biological sex, the bill would have required schools to provide accommodation to transgender students by giving them a "reasonable alternative such as a single occupancy or faculty bathroom or changing area," according to Kremer’s release.

"I could take my daughter, my neighbor could take his daughter, to an open swim at the local high school -- we send our daughters in the locker room to change … there might be a 30-year-old guy in there, changing next to them," Kremer said on WPR’s "Central Time" in May. "He might have exposed himself to them … we call the police, and what are the police going to do?"

The bill didn't pass during the last legislative session. Kremer has said, however, that he plans to reintroduce it when lawmakers return to Madison in 2017.

The bathroom bill isn’t the only recent, high-profile political action regarding transgender rights in Wisconsin.

"It’s not just federal guidance, it’s federal pressure that could cause school districts and universities to lose their share of federal funding," he said. "Clearly, the president’s administration has gone and changed the statute – they’re not permitted to do that."

Schimel said he’s optimistic about the outcome of the lawsuit.

Living in a time when one's sexuality is so public -- and so publicly controversial -- isn’t easy, according to 18-year-old Eddye Toral-Wood of Madison.

Toral-Wood came out as transgender when she was in fifth grade.

"When it comes to trans issues, and people are fighting back at me about that, it’s a bit harder," she said. "Just because, to you, it’s an issue of politics. But to me, it’s my life every single day."

It’s a little different for "K," who’s 12 years old and was the first transgender student to come out at her school in Waunakee. She said she isn't upset by people talking about transgender rights so much these days, even if they aren’t saying the nicest things about her.

"I think people have the right to have their own opinion on certain things, so I don’t find it weird how people are publicly talking about it, because it is kind of an issue for them," K, whose name is also omitted for privacy, said. "I know I can make a change to it, but me just getting mad about it won’t really make a change at all."

Thanks to bathroom policies at their respective schools, both Toral-Wood and K have been able to use the bathroom they’re most comfortable with.

A growing number of schools in Wisconsin, in about 80 districts, are implementing transgender bathroom policies, according to GSAFE, a transgender rights advocacy group.

And some of those schools aren’t situated in hotbeds of progressive political activity, as one might expect.

The Menasha School District, a district in central Wisconsin that serves a fairly working-class population, implemented a transgender bathroom policy a little more than a year ago, according to its superintendent, Chris VanderHeyden.

"Yeah, it probably would lean a little bit more on the conservative side of things," he said of the community’s population.

VanderHeyden said there was some initial opposition to the district’s policy, when it was still in the drafting stages, but there’s been no concern from the community since.

"It’s not been an issue whatsoever," he said.

He isn't expecting to avoid any future drama though.

"It kind of keeps popping up, kind of like the waves on the lake or on the ocean -- there’s a little peak of attention, then it goes away for a little while," VanderHeyden said. "I fully expect it’ll get a lot more attention as we move forward."

Even if some schools resist that change, or move slowly, some transgender individuals aren’t concerned.

LeFlore is attending Wisconsin Lutheran College to study education this fall. A counselor there told them the school doesn’t have any transgender policies in place, but that didn’t deter LeFlore.

"I’m not going to let my sexuality or gender or anything, like, stop me," they said. "I’m going to face struggles all the time in life, even when I’m older, the teachers and students might not like me for being the way I am."

"But, you know, I’m going to be proud of myself and get the degree I need and be able to teach students," LeFlore said.

LeFlore, Toral-Wood and K said they expect some people to be mean, or rude, or to not understand them. But they’re going to keep living their life -- and using the bathroom they think is appropriate, despite political debate, drama and litigation.