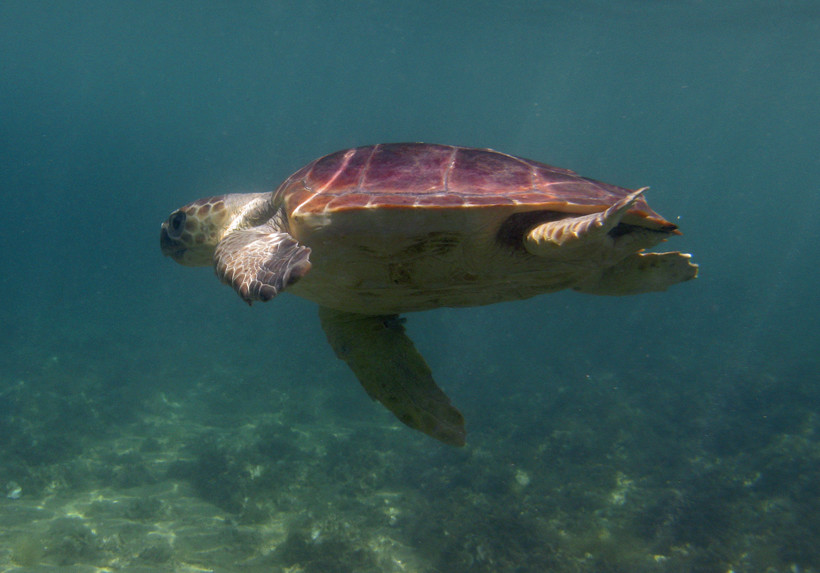 In this Aug. 7, 2008 file photo, one of three loggerhead sea turtles swims in the Mediterranean sea after they were set free by Spanish Queen Sofia and her granddaughter Victoria Federica on the Spanish Balearic island of Cabrera. A new federal study says most of the world's loggerhead turtle populations are it risk of extinction. Loggerheads have been listed as a threatened species since 1978. An upgrade to endangered could lead to more conservation measures, including curtailing fishing in certain seasons or requiring turtle-safe fishing gear. Manu Mielniezuk/AP Photo

'Supernavigators' Author Writes About the Greatest Navigators on the Planet
By Angelo Bautista
Share:

It has never been easier to find your way around the planet thanks to GPS. But for thousands of years, animals and even some humans have been able to traverse vast expanses of oceans and continents without ever having to look at a smartphone.

David Barrie is an award-winning author and a fellow of the Royal Institute of Navigation. His latest book, "Supernavigators," explores the remarkable ways animals and insects get around.

Barrie spoke with "To The Best Of Our Knowledge" about the newest discoveries of animal migration and the dying art of human wayfinding.

Anne Strainchamps: Your book is fascinating and it sounds like you first got interested in monarchs. Within my lifetime, we didn’t know anything about the fact that monarchs migrated or where they went. I know we figured out where they go, but do we know how?

David Barrie: The monarch butterfly, like a lot of other insects, has what's called a time compensated sun compass, which sounds complicated, but it's quite simple. The insect can detect the position of the sun in the sky and can use that to maintain a steady course. Though, because the sun is constantly moving across the sky, it needs to compensate for that movement. So it actually also has an internal clock that enables it to compensate for the changing azimuth of the sun and keep flying straight in a broadly southwesterly direction.

AS: So it really has a tool inside its brain that we don't have, which computes both time, light and angle simultaneously?

DB: Exactly. And this is a remarkable thing for a creature so small with a brain the size of, well, not even a grain of sand. It's a tiny, tiny brain with only a few hundred thousand neurons in it.

AS: Reading your book, that's what comes up over and over again. Some of the tiniest creatures on the planet have some of the most remarkable navigational abilities. For example, the dung beetle was discovered fairly recently.

DB: The nocturnal dung beetle is a truly fascinating insect. I should explain that what dung beetles do is they find a pile of dung, and they collect a piece of it, and they turn it into a beautiful little sphere. And then using their legs, they roll this sphere away to their nests where they can feed on it and lay eggs in it. It's very important that they get away as quickly as possible because other dung beetles will mug them. To go as quickly as possible, you need to go in a straight line. And the way they do that is they tend to use the light of the moon. So if the moon is up, the light of the moon produces polarization patterns in the night sky, which the specialized eyes of the dung beetle can detect, and they can use that to steer a straight course.

AS: One of the things that always seems most mysterious to me is how many animals migrate with incredible precision to a very particular destination without ever having been there or been shown where or how to go. You know, like sea turtles. They'll hatch from eggs. There are no parents anywhere around. Nobody is going to lead them. And they swim off to the exact right island.

DB: Yes, it is absolutely astonishing. And what we do know is that loggerhead turtles that hatch on the coast of Florida are definitely the most impressive magnetic navigators because the tiny little hatchlings perform an extraordinary journey. They get caught up in the north flowing Gulf Stream, and then they are taken all the way around the entire North Atlantic Ocean using ocean currents. It was long thought that they returned in an entirely passive way, just drifting with the current. But it turns out that if they just drifted, not many of them would survive because almost certainly they would get ejected from the warm waters. They actually need to swim constantly to maintain their position in that current system. But in order to do that, they need to know which way they're facing. Ken Lohmann at the University of North Carolina in Chapel Hill has done wonderful experiments in which he took little hatchling turtles and altered the magnetic field around them, and he could make these little hatchlings head in different directions. The directions in which they head seemed to be designed to enable the hatchlings to stay safely inside the current, which will bring them back to their home beaches.

AS: There are a couple of reactions I have. One is to marvel at humans’ ability to figure all of this out. But the other is to really see all of this as a story about, perhaps, the beginning of the decline of the myth of human exceptionalism. It seems like the story that's emerging is that paradigm of animals as being not inferior to us, but in some ways superior.

DB: I totally agree. I think it's a really important lesson that one can learn. Although human beings are obviously brilliant in some ways, and we've developed tools that enable us to navigate with amazing precision -- notably, of course, GPS -- our natural navigational abilities, unless specially cultivated, are really nothing compared to the sort of things that we've been discussing. Indigenous peoples, however, are capable of some truly astonishing feats. If you look at Inuit hunters of northern Canada or the Aboriginal tribes of the desert regions of Australia or, of course, Polynesian islanders, all of these indigenous peoples have truly astonishing navigational abilities. And they don't make use of maps, compasses or any tools of any kind. It's all based on their senses and their natural wits.

AS: What can they do that our GPS-addled brains can't?

DB: Let me talk a little bit about the Pacific Islanders. The navigational specialists, because they're specially trained and selected, start at a very early age, and they are taught the precise positions on the horizon at which 32 named stars rise and set every night. And they can use those stars to maintain a steady course in any direction they choose. On top of that, out on the open ocean, they can also use patterns of swell. Swell is a waveform that is not produced by local winds, but it's generated by storms, often hundreds or even thousands of miles away. These swells follow very regular courses across the ocean so these navigators use the patterns of swell also as a kind of compass. More remarkable though, when they get close to an island target, which may be completely invisible because it's low-lying, they can also pick up the reflections of the waves from that island, and they can work out from those the direction in which to sail to get to the island.

AS: Wow. So to make clear, I imagine they would be standing on the beach of one particular island just looking out at what, to us, would be just an empty flat horizon, but that's not what they see.

DB: No. And indeed, they see the ocean as being their home. But let me give this a bit of context, because I'm not talking about little journeys of 10, 20 or even 100 miles. I'm talking about journeys in some cases that are thousands of miles. It's a happy thing that, in Polynesia at least, these traditional indigenous skills—truly remarkable cultural artifacts that date back for thousands of years—have been not only recovered but preserved. I am afraid, though, that the same is not necessarily true elsewhere. I think there are real concerns about what will happen to the equally impressive expertise of the Inuit and Australian Aboriginal tribes, too, and many others. These are precious heirlooms of our human ancestry. For them to be lost just because it's more convenient to press a button on a gadget would be tragic.