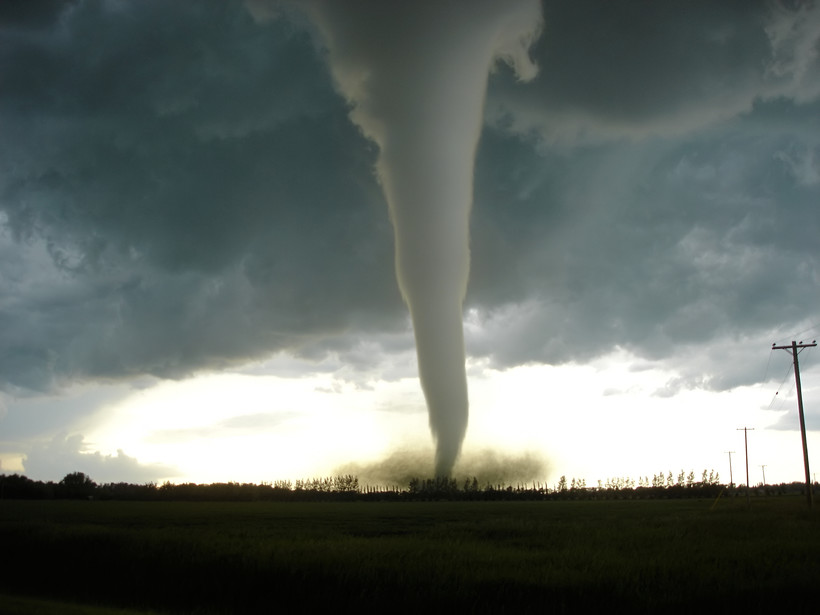 A hot, humid air mass combined with winds are setting the stage for destructive storms Friday across east-central Minnesota and northwestern Wisconsin. They could bring golf ball-sized hail, damaging winds and tornadoes through the region.

A tornado watch remains in effect until 10 p.m. Friday for parts of Minnesota and Wisconsin with the potential for winds up to 80 mph and isolated hail up to 3 inches in size.

Survey teams with the National Weather Service in Duluth believe tree damage spanning several miles west of the Eau Claire Chain of Lakes near Gordon in northern Wisconsin was caused by a weak tornado around 2 p.m. Thursday.

"The survey crews saw evidence of debris that was along a very compact and consistent path, and there were indications that there was rotation within that, which would tell us it was a tornado," said weather service meteorologist Joe Moore.

There were no reports of injuries or fatalities from the storm. Survey crews also found evidence of two weak tornadoes in northern Minnesota earlier this week.

A tornado watch has been issued for parts of Minnesota and Wisconsin until 10 PM CDT pic.twitter.com/veI5uHYFE9

Moore said more tornadoes are possible Friday afternoon and evening as storms roll from the I-35 corridor in Minnesota through Burnett, Washburn, Sawyer and Price counties in northern Wisconsin.

"These storms are not going to be the kind that you can ride it out in a tent or camper," said Moore. "You’re going to want to be in a really sturdy building and permanent shelter because they could really be destructive, taking down tree limbs and that sort of thing."

Jim Tolbert, emergency management director for Burnett County, said they’re trying to get the word out so people can prepare for the worst.

"One of the ways we’re doing that is through the new BEACON — our emergency alert system here in Burnett County," said Tolbert. "We signed up all the landlines, and we’ve been having an outreach program to try to get people to try to sign up their cell phones."

He said they signed up around 10,000 numbers, mostly landlines, since it went live earlier this year. Visitors in the area can sign up for alerts by texting "BCVisitor" to 69310.

The National Weather Service reported NOAA weather radios were down in Park Falls, Ashland and Spooner Friday afternoon due to a "telecommunications issue." The agency said the radio transmitters were up and running again around 5 p.m. Friday.

"Folks can do some pre-planning," said Dave Sletten, interim emergency management director for Douglas County. "Having an emergency preparedness kit and looking through your homes so if there is severe weather you know where to seek shelter."

The National Weather Service said storms could be moving as fast as 30 to 50 mph. But, Moore said they don’t anticipate widespread flooding. The storms should clear out late Friday evening with no severe weather expected over the weekend.