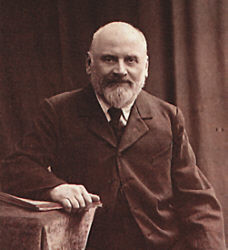 In June 1866 the Russian composer Mily Balakirev was in Prague, attempting to arrange a performance of Mikhail Glinka's opera A Life for the Czar.  Things had gone badly.  His efforts had been interrupted by a war between Austria and Prussia.  Six months later the war was over and Balakirev was in Prague again.  But his struggle was by no means over.

The opera had been produced in his absence, and when he arrived in Prague, Balakirev saw a performance of it.  He wrote to a friend in Russia, "What a horror it was!  I haven't quite returned to my senses yet.  The overture was passable, but then the curtain rose, and--oh, horror!  What costumes!  Peasants waving some kind of peaked caps, overcoats with white buttons.  They had beards, but not Russian ones."

The principal conductor of the Prague opera, the composer Smetana had directed the production, and Balakirev became convinced that he had contrived to sabotage the opera.  He wrote to his friend:

"Thank goodness Smetana will not be training the chorus.  A proper musician who appreciates Glinka’s music is replacing him.  The artists are very eager to sing Glinka's operas properly because they like them.  They assure me that Smetana intentionally gave them the wrong tempi in performance in order to throw them off, and he sometimes succeeded.

"They say that Smetana and a cohort are forming a large faction to hiss A Life for the Czar off the stage, but another group is being formed to sabotage them.  The main instigators in all these local plots are the Poles. They have already managed to form an entire anti-Russian coalition among the Czechs.  Smetana and I are no longer on speaking terms.  All we do is bow to one another.  Clearly he knows that I know everything."

Glinka's less politically charged opera Russlan and Ludmilla was received with thunderous applause.  But then came Balakirev's long-awaited performance of A Life for the Czar.  It created such political tensions that after a single performance the Prague directors asked Balakirev to return to Russia.