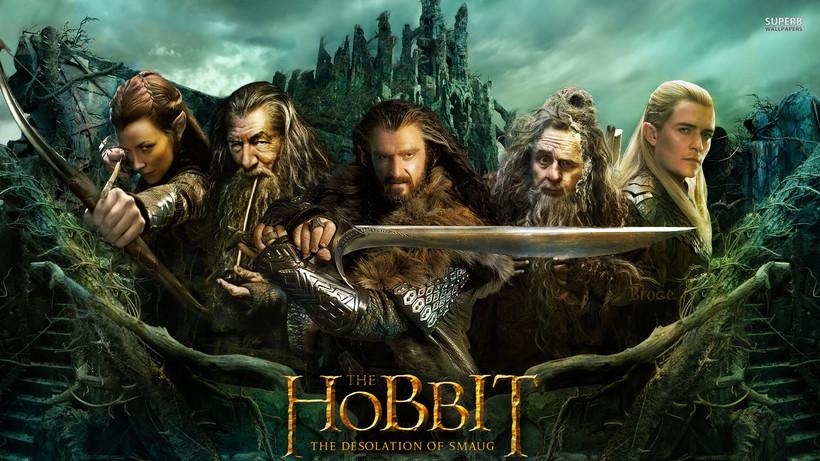 The path to Middle-earth might well be paved with popcorn as hordes of moviegoers across the country queue up for the opening weekend of “The Hobbit: The Desolation of Smaug” on Friday.  Box-office observers are expecting a record turnout for the second installment in director Peter Jackson’s "The Hobbit" trilogy.

Joining the wizard Gandalf, his merry band of dwarves and the not-so-merry band of orcs this time is Smaug the dragon, played by Benedict Cumberbatch. Critics are already hailing it as the best portrayal of a dragon in any movie ever.

For fans of author J.R.R. Tolkien, the characters’ names alone cast a spell: Bilbo Baggins, Gandalf the Grey, orcs and trolls and, above all, hobbits -- the most beloved of all Tolkien’s characters. But, what’s behind the perennial appeal of the "halflings"?

Writer and Tolkien nerd, Noble Smith, said he believes it’s the philosophy of life woven into Tolkien’s epic fantasies. The author of “Wisdom of the Shire, A Short Guide to a Long and Happy Life,” Smith said he fell in love with Tolkien when he was 12 years old.

After checking out from the library his first Tolkien book, “The Fellowship of the Ring,” he said he couldn’t put it down, to the point where he’d pretend to be sick so he could stay home from school and keep reading. Soon, the young Smith turned his room into a "hobbit hole" and burned his tongue trying to smoke a pipe like Gandalf, his favorite character.

In the 30-some years since, Smith said he has discovered much of value in Tolkien’s epic tales. He can tell people "How To Create A Hobbit Garden," supply a list of the "14 Must-Have Tolkien Books," and delve deep into what he calls "The Hidden Hobbit," revealing “10 Secrets from Tolkien's Classic.”

And then, there are the "13 Life Lessons From The Hobbit" that he learned in all those days and nights curled up in his hobbit hole. Consider, for example, Life Lesson No. 7: “These Hairy Feet Are Made For Walkin’,” a reminder that walking every day is a key to longevity. Or, Life Lesson #8: "Party Like A Halfling,” which celebrates the fact that at birthdays hobbits give, instead of receive, presents.

And, he urges, don’t forget to “Kick off your shoes. Unburden yourself with song. Eat and drink and dance on the tables.”

Life Lesson No. 13 is called “Give It Away, Give It Away Now.” Smith said he believes that, just as Sam and Frodo have to face their worst fears in Sauron’s dark realm, “(We) all have our own ‘Rings of Doom’ to bear. The trick is to carry it for as long as you deem necessary, and when the time is right, cast it into the fire and be free of the burden. Watch it melt.”

Words to live by, especially when facing a fire-breathing dragon.