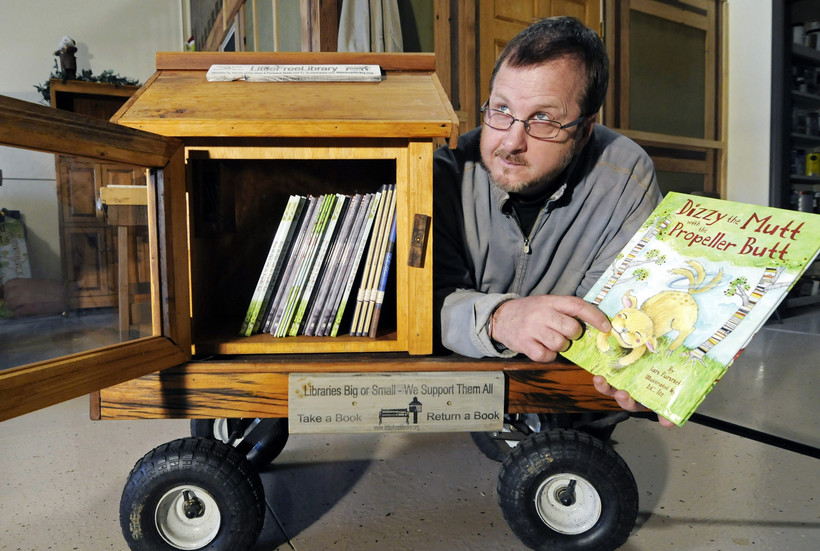 In this Dec. 6, 2012 file photo, Todd Bol poses with a Little Free Library lending boxes in Hudson, Wis. Bol, who founded Little Free Library, the boxes of books for sharing that popped up across the U.S. and spread to more than 80 countries, died Thursday, Oct. 18, 2018, in a Minnesota hospice of complications from pancreatic cancer, according to Little Free Library spokeswoman Margret Aldrich. He was 62. Jim Mone/AP Photo

Spokesman: Dol Died Of Complications From Pancreatic Cancer
By The Associated Press
Share:

The Wisconsin man who founded Little Free Library, a project that now sets up boxes for sharing books around the world, has died. Todd Bol was 62.

A spokeswoman for Little Free Library says Bol died Thursday in a Minnesota hospice of complications from pancreatic cancer.

Bol designed and built the first Little Free Library at his home in Hudson, Wisconsin, in 2009, as a tribute to his mother, who was a teacher and book lover. Bol put up a miniature version of a one-room schoolhouse on a post outside his home, filled it with books and invited neighbors to borrow them.

The boxes have since popped up across the United States and spread to more than 80 countries, with more than 75,000 registered Little Free Libraries worldwide. The whimsical boxes invite passers-by to "take a book, share a book."