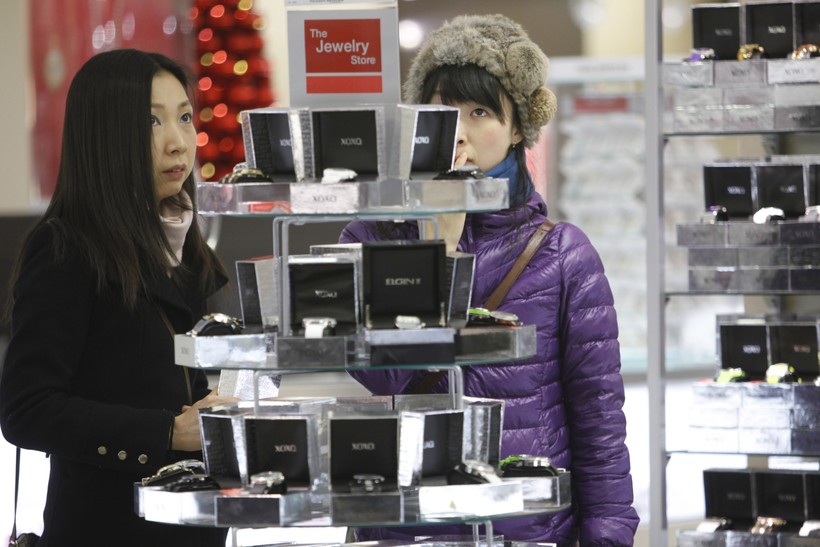 In this Dec. 18, 2010 photo, shoppers inspect watches in the jewelry section of the J.C. Penny store at the Manhattan Mall in New York.  Photo: Mary Altaffer/AP

Tips To Save Money On Holiday Shopping

Before getting a jump on holiday shopping this week, money columnist Cameron Huddleston says it pays for people to do some homework to minimize potential hassles and avoid paying for that Christmas cheer for months to come.

American consumers plan to spend an average of $589 on gifts alone, according to the National Retail Federation. With pressure from ads, children and family gift exchanges, Huddleston of GOBankingRates said it can be very easy to overspend.

"It's just so easy to really empty your wallet during the holidays, and then afterward you're thinking, 'Oh my gosh, where did all that money go? And now I've got credit card bills to pay,'" she said.

Huddleston suggested people do some basic household math before venturing out to the stores. Add together all of the necessary bills, such as the mortgage, rent and utilities, and examine how much money is left. If the difference isn't as large as they hoped and they wish to pay with cash, they have to figure out what spending to cut. She mentioned eating out and going to the movie theater are good places to start.

Otherwise, people will have to scale back on gift-buying. In that event, Huddleston said to consider having conversations with family members about drawing names instead of buying presents for everyone. Spouses can also agree to spend less on each other, if at all, and perhaps focus on the children.

Here are some other money-saving holiday shopping tips Huddleston suggested:

Pass On Fido And Fluffy

Another way to save money is to resist the urge to buy for pets. Pet owners – nearly half of all households nationwide – will spend an average of $62 on their furry friends, according to the accounting firm, PwC. For millennials, that figure rises to $81. While Fido and Fluffy may be near and dear to their owners' hearts, it's an easy area to cut. Rather, Huddleston proposed wrapping up a toy the dog already has and enjoy watching them get at it.

It's also important to know how retailers persuade shoppers to spend more money than they planned. Huddleston said they often put items they want people to notice at eye level and the end of aisles. They also play Christmas music to promote warm, fuzzy feelings and infuse pleasant-smelling scents to get people in a festive mood. To avoid the temptation to buy extra items, Huddleston said to simply shop online. Plus, online shoppers can usually enjoy the same Black Friday deals as what's offered in the brick-and-mortar stores.

As for those doorbuster deals, Huddleston asserted they're really just gimmicks to get people in the store, and many times, the items on sale are off-brand products the store wants to unload. Failing to score a great deal can also lead to conciliatory purchases. So, she urged people to skip the early-morning trek.

"You come in, you don't get the deal, so you feel defeated and you think, 'Well, shoot, I'm here,'" she said. "'I got up so early, I'm going to get something. Something is going in my cart because I'm not leaving empty handed.'"

When putting together a shopping list, base the items on what your friends and family want, not on what's on sale. Then, check online to see where it can be found at the lowest price. Huddleston recommended dealnews.com, bfads.net and pricegrabber.com.

In addition, download a price comparison app. One such program, ShopSavvy, allows users to scan an item to see if it's available cheaper elsewhere. Further, Huddleston said that many retailers will match prices of competitors.

One other app she said to consider is called Santa's Little Helper. It allows users to make a list and create a budget, then cross them off as purchases are made to help shoppers stay on track.

Don't Shop For Yourself

Individuals plan to spend an average of $140 on themselves, according to the National Retail Federation, the second-highest total in the survey's 13-year history. If shopping on a budget, Huddleston encouraged people to make their requests known to others who may be buying gifts for them or ask for gift cards so they can get it themselves.

Plan For After The Holidays

Huddleston said if people used credit cards to fund overspending, come up with a plan to pay them off as soon as possible. Avoid dining out and spending money on nonessential items to help get out of debt.

"You need to think of it this way," she said. "You worked really hard to do your research to get your deal so you could save money. But those savings are going to wiped out if you're paying interest on the credit card."

Debt can also get in the way of other financial goals, such as saving for retirement, a down payment on a house or a child's college education.

"You don't want a one-time event, the holidays, to ruin your financial plans for the rest of the year," Huddleston added.

More of her money-saving Black Friday shopping tips can be found here.

Editor's note: "On Your Money" can be heard at 8 a.m. Tuesdays and rebroadcast at noon Saturdays on the Ideas Network. Email personal finance questions to onyourmoney@wpr.org.