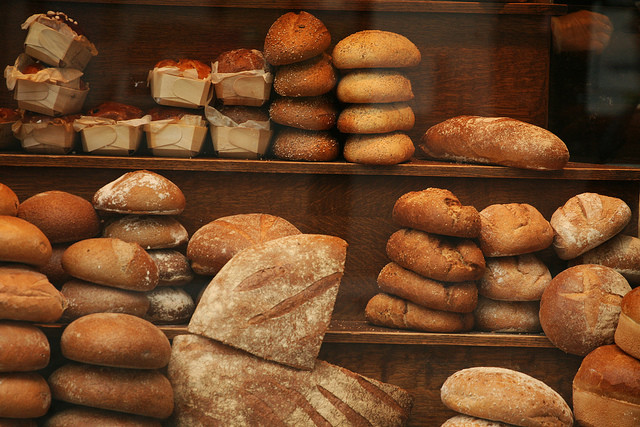 Tips For Baking That Perfect Loaf Of Bread

Baking your own bread can be an intimidating experience.  Don’t worry.  Chef and PBS host Ian Knauer is here to help.

“Anyone can learn to make bread,” Knauer said.  “It is one of the most feared and also one of the easiest things to make in your own kitchen.”

Bread is generally made up of four ingredients: yeast, flour, water and salt.  Knauer said the biggest mistake amateur bakers make is misusing the function of yeast.  “You’re basically living in the yeast’s world, and you have to learn to understand what the yeast wants and what it’s doing.  You have to be a good listener to bake bread.”

Knauer noted that yeast is a living organism.  And like other living organisms, yeast thrives under certain conditions.  Knauer said if you keep the yeast in warm and moist conditions, it’ll behave better, rise in the proper time, and the final product will taste much better.

Another big mistake?  Not letting the bread completely cool before cutting into it.  Knauer said it’s tempting to cut into a warm, freshly baked loaf of bread, but the cooking process isn’t complete until the loaf cools.  The moisture inside the bread steams it from the inside out, giving it a crispy crust.  If you must have warm bread, Knauer suggested rewarming the bread afterwards in the oven.

Got all that?  Good.  Here’s a recipe for basic bread dough from Ian Knauer to get you started.  He said it can be used for baguettes and boules along with other breads like rolls, and breadsticks.

Place the yeast and water in the bowl of a stand mixer. Add the flour and salt and mix on low speed with the paddle attachment until combined. Increase the speed and beat the dough until it no longer sticks to the side of the bowl, about 3 minutes. Turn the dough out onto a lightly floured work surface and for into a ball. Lightly flour the bowl and place the dough back in the bowl. Cover the bowl with a kitchen towel and let the dough rise at warm room temperature until it has doubled in bulk, 1 to 1/2 hours.

Meanwhile, preheat the oven to 475°F with the rack in the middle and generously flour a baking sheet.

Turn the dough out onto a lightly floured work surface, form into a rough oval, and place on the baking sheet. Dust the top of the loaf with flour, then loosely cover with a kitchen towel. Let the dough rise until it has doubled in bulk, about 45 minutes.

Make 3 cuts in the top of the loaf with a razor blade or a very sharp knife and place the baking sheet in the oven. Place an ice cube in the bottom of the oven or spray the oven with a water-filled atomizer. Bake until the bread is golden brown and sounds hollow when tapped, about 1 hour. Transfer the bread to a rack to cool completely.