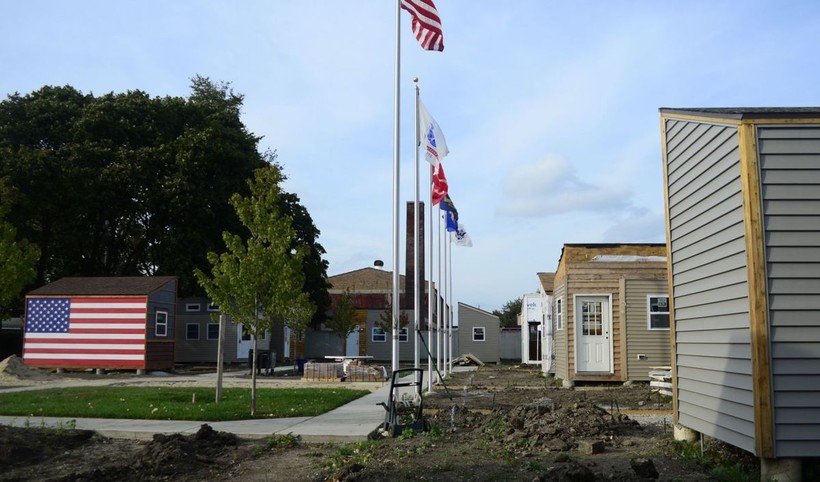 With about half of the homes completed, Veterans Outreach of Wisconsin plans to cut the grand-opening ribbon for the James A. Peterson Veterans Village on Sunday. Photo courtesy of Christina Lieffring/The Journal Times

Homeless veterans may soon have a place to call home in Racine, where a village of tiny homes has been built to provide shelter and services such as mental health counseling, financial advice and assistance in searching for more permanent housing.

The James A. Peterson Veterans Village includes 15 tiny homes, which share the grounds of a community center, said Jeff Gustin, co-founder and executive director of Veterans Outreach of Wisconsin.

The exact number of homeless veterans — both in Wisconsin and in the nation — isn't easy to pin down, Gustin said.

"They may not have ever spent the night out on the street, but they don't know where they're going to stay tomorrow. They're bouncing from couch to couch, house to house, and it's very hard to recover and get back on your feet when you don't know where you're going to lay your head the next day," said Gustin.

The National Coalition for Homeless Veterans also notes that flawless counts are impossible to come by, but reports that 39,471 veterans are homeless on any given night, citing the U.S. Department of Housing and Urban Development estimates.

Christopher Hanson, president and CEO of the Tomah-based Veterans Assistance Foundation, said there are lot of barriers to housing for veterans.

"Housing expense is probably the No. 1 barrier," Hanson said. "But we also have many of our veterans that are either homeless or at risk of homelessness that are battling either mental health or drug and alcohol issues and with those issues, often come legal problems and when you have somebody that has one or two legal ramifications on their record, that makes it even more difficult to try to secure housing from private landlords or companies that own apartments."

The National Coalition for Homeless Veterans also cites the "extreme shortage" of affordable housing and livable income as challenges faced by veterans when looking for housing.

Gustin noted that while veterans are susceptible to the same problems as civilians, they also often deal with the added complications of post-traumatic stress disorder or service-related injuries.

"It's tough everywhere right now, and we feel that if somebody was brave enough to serve their country, that they've earned and deserved a hand-up, you know, getting back on their feet," Gustin said.

The tiny homes in Racine offer single occupancy. Gustin suggests thinking of them as bedrooms, with the community center serving as the remainder of the home.

"The reason we did that is we didn't want to leave enough things in our tiny houses for a homeless veteran to be able to move in and be able to isolate themselves," Gustin said. "By leaving ... services out, they have to frequent the community center in hopes that they will be socializing and participating in the program, you know, at their own comfort level."

Veterans Outreach of Wisconsin held a ribbon cutting in early November to celebrate the completion of five tiny houses, according to The Racine Times Journal. The other 10 need minor touch-ups.

People need to stop by the village and fill out an application to apply for a home. The Racine Times Journal also reported the organization is considering making online applications available.

Gustin said the group has been taking applications with the possibility of interviews and screenings next week.

According to the Veterans Outreach of Wisconsin, once accepted into the program, veterans are eligible to enroll in a two-year transitional living program during which the group will help them recover from the "state of homelessness."

Even with the services in place, these things can take time. Gustin noted on WPR's "The Morning Show" that while the group would like to see success within two years, that "as long as the resident is working positively toward the end goal of financial security and their own permanent housing, we'll work with them as long as that takes to happen."