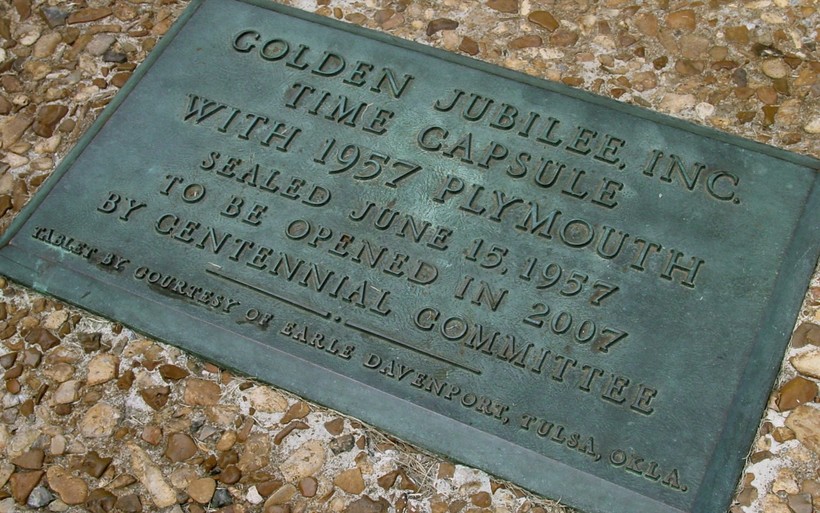 A time capsule buried in Tulsa, Oklahoma, beneath this plaque, before it was unearthed in 2007. Photo: thinktk (CC-BY-NC).

It was major news last week when excavation workers and a museum conservator unearthed a time capsule buried in Boston by Paul Revere and then- Massachusetts Gov. Sam Adams. However, one history professor says that the value of these buried containers are usually of limited historical value.

Jon Pollack, a professor of history and pop culture at Madison College, said people are unlikely to put anything truly unique or important in a time capsule since they’re essentially burying that item indefinitely. He said that the everyday items that consequently end up in the capsules contribute little to our understanding of the time they’re from.

For example, the Boston capsule, still under inspection, is thought to contain coins and a newspaper from 1795, the year it was buried in the Massachusetts State House. Newspapers, however, are already carefully archived by a number of institutions, according to Pollack.

“I can’t really think of anything where something that’s come out of a time capsule (is) really a one-of-a-kind item that’s not available elsewhere,” Pollack said.

Even if that were to happen, there’s also the problem of decay. Paper, metal, videos, and even DVDs and CDs decay over time, unless they’re carefully preserved — or placed in a capsule elaborate enough to include a climate-controlled vault.

“Almost anything you’re going to have in (a capsule) is going to fall apart,” he said.

Also, in an increasingly digital world, any technology placed in a time capsule would face the problem of incompatibility. For example, said Pollack, if this year’s iPhone 6 were buried in a capsule, the device would be almost alien to people who uncovered it in 50 years and would likely be unable to function.

Still, he said, time capsules have a role to play for ordinary people.

“A lot of history is just, ‘How did people live in the past?’ and a time capsule is a way that anybody can try to speak to that,” Pollack said. “They're a way for us to try to tell the history of our own time.”

For his own time capsule, Pollack said, he'd include a tribute to the “foodie” movement — something like an organic, locally grown food product.

“It’s a certain time in American history when it comes to the care and effort people put into buying basic commodities,” he said.

Pollack said he would also think about turning the format of the capsule into a tribute to the advertiser-driven nature of our economy, perhaps by selling naming rights to the capsule or providing advertising space inside the capsule.

"One of the things that’s kind of critical about this moment is that everything’s for sale — everything has advertising and sponsors and donors,” Pollack said.