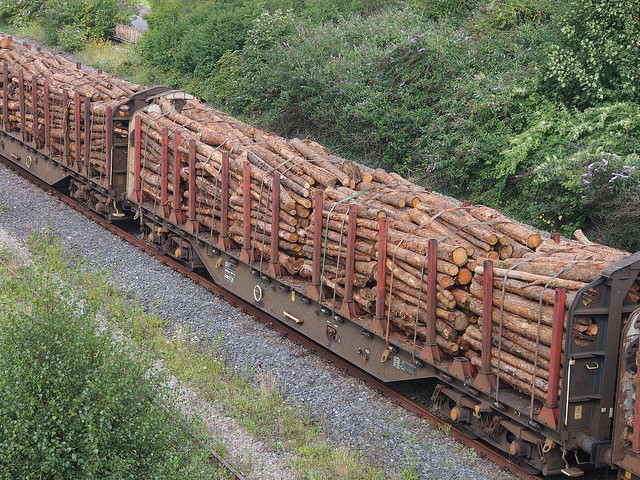 A bipartisan bill would allow public money to be used for manufacturing rail cars to ship wood.

The bill requires the Wisconsin Department of Transportation to award a $4.8 million grant to the Northwoods Rail Transit Commission from the state's Freight Rail Infrastructure Improvement Program, which provides loans to private companies to improve transportation efficiency and connections to the national railroad system. The money would be used by the transit commission to purchase the log cars.

Sens. Janet Bewley, D-Ashland, and Tom Tiffany, R-Hazelhurst, introduced the measure. Bewley said that currently, there's a shortage of cars that needs to be addressed.

"The railroads are devoting most of their cars over to sand, and we need to come up with the cars we need to haul wood products," said Bewley.

She said the cars would be publicly owned and available for use by any railroad.

Northwoods Rail Transit Commission Chairwoman Wendy Gehlhoff said they’ve been applying for a federal grant and state money to fund construction of 40 to 50 new log cars. She said many log cars currently in use are set to reach the end of their life expectancy.

"In the next few years, we stand to lose more than half of the log cars that are out there," she said.

Canadian National operates rail lines in northern Wisconsin that traditionally carried logging freight and were once owned by Wisconsin Central Limited. Gehlhoff said CN isn't investing much in new cars because it’s not profitable for them to haul wood.

Patrick Waldron, a spokesman for CN, said there has to be a revenue base to support the investment in additional rail cars, and that there’s little rail business on regional lines in the northern part of the state.

"(They) need enough business to sustain the rail corridors," he said.

Waldron said CN is working with the commission to grow rail business in the region. The railway company is contributing $1.2 million in matching funds if the commission receives a federal grant.

"You’re not burning as much fuel, and you’re getting a lot more done per hour," he said.

The state loan program currently doesn’t allow funding for rail cars or locomotives, according to David Simon, railroads and harbors section chief for the state DOT. He said the bill would designate the source of funding for a possible grant award, but it wouldn’t change how the program is run. The funding level for the Freight Rail Infrastructure Improvement Program is around $5 million each year.