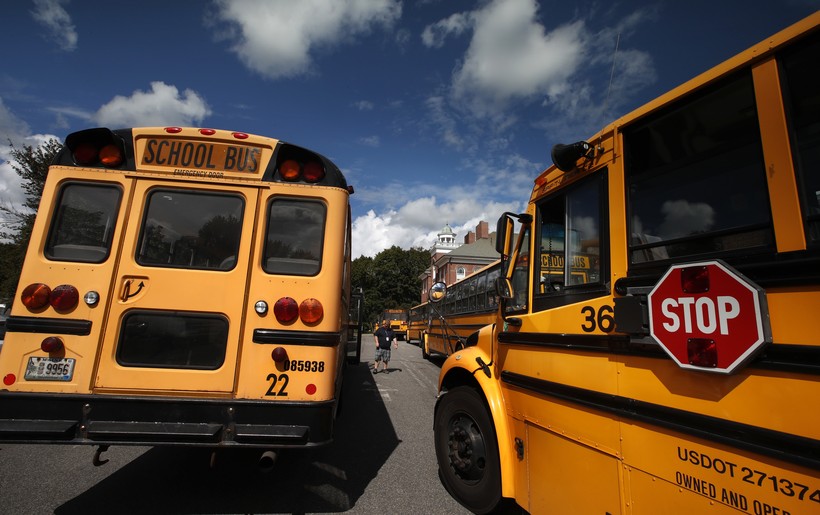 With Fewer Drivers, Some Districts May Cut Or Combine Routes
By Rob Mentzer
Share:

Wisconsin’s tight labor market is making it hard to find drivers for the state’s school bus fleets. In the worst cases, combined routes could mean longer bus rides for kids.

Most schools start in Wisconsin in the first week of September. The companies that contract for bus drivers have spent the summer trying to secure enough drivers to cover their routes.

"It’s a huge concern," said Dan Kobussen of Kobussen Buses, a Fox Valley-based company that has contracts with 23 districts across the state. "It definitely is the worst I’ve seen it."

The great majority of school buses in Wisconsin are privately contracted, as opposed to operated by the district. That allows companies like Kobussen to specialize in the business of transporting kids, and relieves districts from the need to find drivers themselves. For the upcoming school year, Kobussen said the Iola-Scandinavia School District in central Wisconsin converted from a district-run bus fleet to a contract with Kobussen — largely because it became too hard to hire drivers.

But with unemployment at historic lows of around 3 percent for the last year, private companies like Kobussen are struggling, too.

School bus driving is a part-time job, and drivers can choose among morning or afternoon routes or both. Wages typically start around $17 per hour.

But it’s a job with a high barrier to entry, said Steve Roekle, owner of the Manitowoc-based Brandt Buses. It requires a commercial driver’s license (CDL), rigorous drug testing and background checks, plus a physical exam and a motor vehicle driver’s history check. All of those factors serve to limit the pool of potential drivers. And strains on the state’s workforce have played a role, too.

"We used to get shift workers at factories who after working first shift would come in and drive an afternoon route," Roekle said. "Or before their second shift, they would drive the morning route. But that has dried up as well, because they’re working overtime."

The state’s aging population is one factor, as semi-retired baby boomers who drove routes for some extra income are aging out, Roekle said. And in rural areas, the state’s dairy crisis is having the secondary effect of making bus drivers scarcer.

"You used to drive around the state of Wisconsin and, inevitably, in the rural areas you would see that school bus parked at a dairy farm," Roekle said. As record numbers of dairy farms close, though, life changes for those farmers — such as new, off-farm jobs — mean they can’t drive those routes anymore.

"That's a driver that normally was available to a lot of these rural districts that is no longer available," Roekle said.

There are districts that have had to cut service or combine routes due to a lack of drivers. Some districts are encouraging staffers to drive, said Cherie Hime, executive director of the Wisconsin School Bus Association.

Districts and bus companies "are looking at whether cooks in the school, or janitors or teachers would be a good candidate for bus driver," Hime said.

Hime said it can be a rewarding job, an opportunity to make a difference in kids’ lives. And Roekle noted that, because it follows the school calendar, there’s no work on nights, weekends or holidays, and most drivers don’t work over the summer.

Kobussen said in addition to boosting wages, his company pays attention to details of drivers’ experience to try to retain workers.

"When it gets this tight," he said, "every little bit matters. Is the windshield clean? Is the bus warm? That’s the kind of stuff we’re looking at. We’re trying to make it an enticing job."

When drivers are scarce, though, companies may resort to creative solutions.

"In a school bus company, everybody drives," Roekle said. "Your mechanics, your office staff, your owners. Everybody has a CDL, and you always try to have a backup that way."