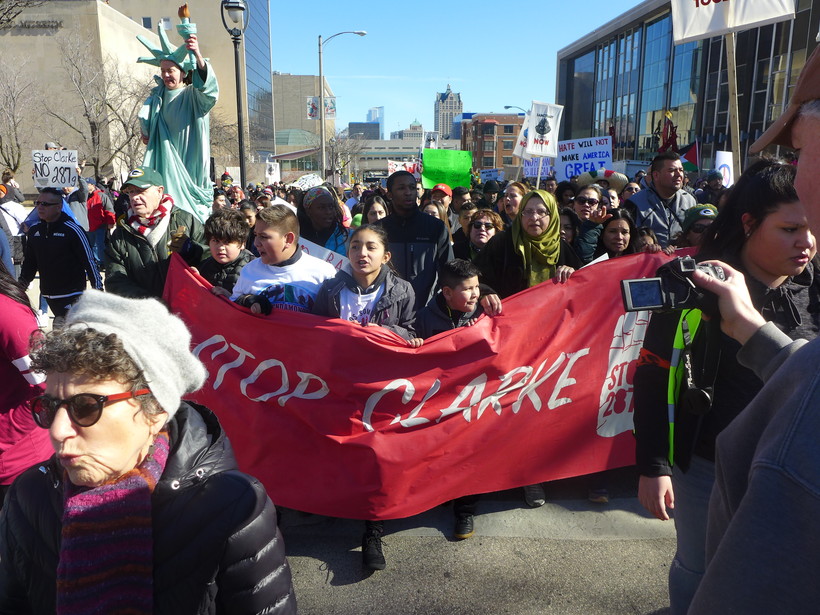 Participants in the "Day Without Latinos" march in Milwaukee.

Thousands Rally In Milwaukee For 'Day Without Latinos'

Thousands of people gathered Monday in Milwaukee's predominantly Hispanic South Side and marched to the Milwaukee County Courthouse downtown to protest the sheriff's plans to crack down on illegal immigration.

A protester at the "Day Without Latinos, Immigrants and Refugees" strike held Monday in Milwaukee. Ross Terrell/WPR

Billed as a "Day Without Latinos, Immigrants and Refugees" strike, the march was organized by activist groups including Milwaukee's Voces de la Frontera and drew ralliers from at least 12 cities in opposition to Milwaukee County Sheriff David Clarke's plan to activate his deputies as immigration officers as a part of a federal program.

Milwaukee resident Jorge Montiel, originally from Mexico City, said seeing the number of people that showed up in solidarity gave him hope.

"When we, the Latino people get united, we can accomplish a lot of things," Montiel said. "We're going to keep on fighting until they kick us out or we win but I know that we're going to win for sure."

Members of Voces de la Frontera urged Latinos to know their rights in regards to immigration. They passed out fliers to the crowd informing them of ways to continue to stay active and not have their rights violated by law enforcement.

"287g might be a law but it is an unjust law," he said, referring to a section of federal immigration law. "I say that we can just add this one extra thing to the list of reasons why Sheriff Clarke should resign now."

County officials and other speakers lead the crowd in chants of "Si se puede" or "Yes, we can."

Last year, a similar march drew thousands of people to the state Capitol in Madison.