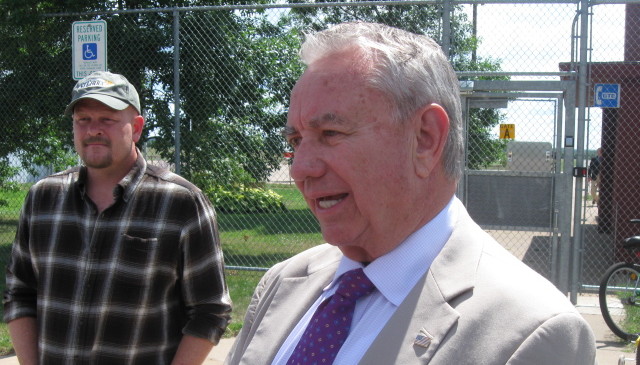 Former Gov. Tommy Thompson is optimistic that a high-speed rail line from Madison to Milwaukee will eventually be built. He also sees “huge potential for all types of energy” in the Midwest.

Thompson said those ventures are possible through the regional advocacy group that he’s helping to lead called the Midwest Council, which aims to promote federal policies to improve prosperity in Wisconsin and nearby states.

The former Republican governor said the nation’s heartland is often overlooked by Washington, D.C., policy-makers, especially with regard to federal funding in areas including business, agriculture, higher education and transportation.

According to Thompson, one such example is with regard to health care.  He insisted that the Midwest Council can help make sure that federal Medicare funds get distributed more evenly.

Mass transportation, particularly high-speed rail, is another area that Thompson said would benefit from the organization.  Thompson served as chairman of Amtrak during his tenure as governor.

He renewed his support for a line connecting Milwaukee to Madison.  An $810 million project to link the two cities, paid for with federal stimulus money, was rejected by Gov. Scott Walker shortly after being elected in 2010.  Walker said the train would wind up costing state taxpayers in the long run.

“I agree with Gov. Walker that we do not want to place additional burdens on taxpayers, but I also am very much in favor of developing that high-speed corridor between Milwaukee and Madison,” said Thompson.

Thompson asserted that the Midwest Council could come up with a better plan to pay for the line.  He also praised the success of the Milwaukee to Chicago Hiawatha service.  He said it’s one of the most used railroad services in the area and is cheaper, faster and more convenient than driving.

As for sources of energy, Thompson said that Wisconsin’s natural resources and types of terrain make the state suitable for a wide range of options.

“I don’t think we can overlook any,” he said.  “For the Midwest as a region, we have tremendous opportunities and resources to tout, and I don’t think we’re doing a very good job of it.”

To accomplish these and other endeavors, Thompson said the Midwest must to do a better job of making its needs and desires known on Capitol Hill.

However, don’t expect to see lobbying or ads during political campaigns to be a part of the playbook.

“That gets into a partisan thing.  I’m not going to be involved in that,” said Thompson.  He stated that the Midwest Council’s bipartisan make-up is one of its strengths.  Thompson is a Republican; the other chairman, former Nebraska governor and U.S. Senator Ben Nelson, is a Democrat.

In addition to being Wisconsin’s longest-serving governor, he was from 2001 to 2005 as secretary of the U.S. Department of Health and Human Services under President George W. Bush.  He was also a 2008 presidential candidate for a few months.

Thompson was asked if he had any advice for Walker, who is considered by many to be a presidential candidate for the 2016 election.

“I tried and didn’t even get out of the state of Iowa, so I’m the last one who should be giving out information and advice,” said Thompson.  “I just know that any time you have a candidate from your particular state, you’re well off.”