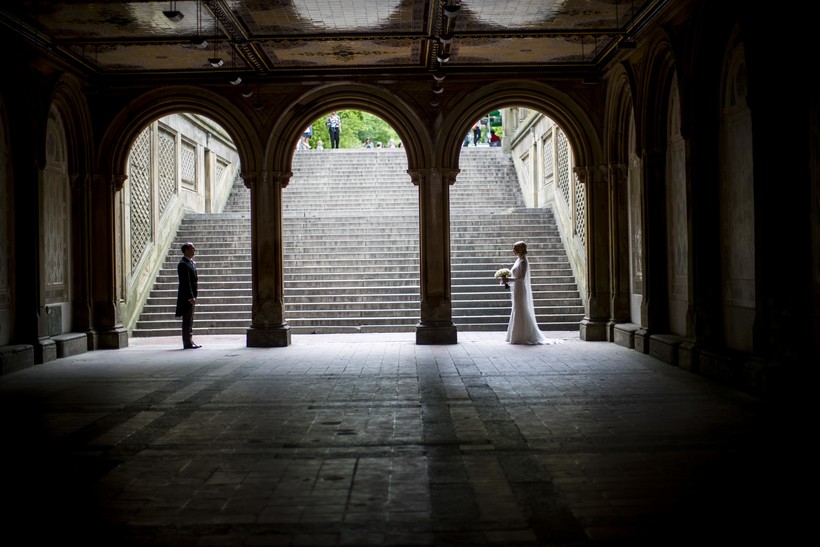 A bride and groom pose for their wedding pictures at the Bethesda Terrace in New York's Central Park, Tuesday, May 23, 2017. AP Photo/Mary Altaffer

Author Of 'Wife, Inc.' Talks About How Marriage Has Changed In The 21st Century
By Gretchen Brown
Share:

"Forget about having it all, or not having it all, leaning in or leaning out," she wrote. "Here’s what nobody is telling you: Find a husband on campus before you graduate."

Patton wasn’t advocating explicitly for finding love. She was saying that young Princeton women should marry someone who is their "intellectual equal." And they should do it soon.

The advice spurred a backlash, but also a book deal for Patton. That says a lot about the resonance of her message, says Suzanne Leonard, a professor of English at Simmons College in Boston.

"Though she did get a lot of backlash, there was actually a lot of support for what she said," Leonard said. "People thought, that makes sense. It is a tight market. And you are surrounded by a concentration of high earners in a way you may never be again."

She said Patton’s attitude is reminiscent of changing attitudes in American culture towards marriage. Marriage, increasingly, is an economic institution and status symbol, just as much as it is a romantic partnership.

Leonard writes about this in a new book, "Wife, Inc.: The Business of Marriage in the Twenty-First Century."

She said Patton’s thoughts might seem antiquated to many. But even Facebook COO Sheryl Sandberg, a self-proclaimed feminist, writes in her bestseller 'Lean In,' that the most important career choice a woman can make is who she marries.

"She talks about finding a supportive partner, finding a partner who is going to be able to nurture a woman’s own ambitions," Leonard said. "And so Sheryl Sandberg, as much as her book was about a professional trajectory for women and professional accomplishments, she very much yoked that to their personal lives."

Some research backs that up. One study found that people who get married — and stay married — are more likely to become wealthier than people who never marry or who divorce.

Leonard says pop culture has always told women how to "make themselves marriageable." The difference is, women today are taught that their ability to get married, and who they marry, is an extension of their brand.

Their ability to build a brand, then, affects their potential for success.

Amanda Hess writes about this phenomenon of people as brands for The New York Times Magazine.

"Branding," she writes, "Has taken over not just work but life itself, seizing control of our appearances, our social relationships, even our approach to civil society."

And it has permeated romantic relationships in the era of online dating, where web searches yield millions of pages of advice for how many pictures you should have, what emotions you should show, even what colors to wear to make yourself more prone to a right swipe, Leonard said.

Marriages have decreased in the United States, but not equally across class.

Today, the Americans most likely to be married are also the most educated, reaffirming the idea of marriage as a marketplace, she said.

Wife, Inc.: The Business of Marriage in the Twenty-First Century

Wife, Inc.: The Business of Marriage in the Twenty-First Century (Critical Cultural Communication)